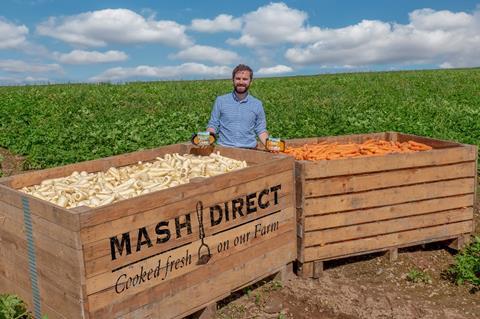 Vegetable grower and processor Mash Direct has launched a platform to help people in Northern Ireland find jobs in the food sector.

The County Down-based business received more than 1,000 applications for 30 roles advertised on social media in just two days at the start of the pandemic.

The surge in interest prompted it to approach other Northern Irish food businesses to see if they could pool applicants - leading to the creation of online platform Feed the Nation NI. The website has now developed into an “employment match-making service”, run by public body Invest NI.

“The response was astronomical but it was quite sobering to realise how widespread the economic damage was going to be off the back of coronavirus,” said Mash Direct’s chief operations officer Jack Hamilton.

“The new platform is not run for our benefit, it’s benefiting the public. Invest NI host it and they deal with all the data. We’ve tried to help as many people seeking work as possible by referring them onto it.”

“The response to these adverts from our members has been good, although recruitment processes are ongoing,” said Northern Ireland Food & Drink Association executive director Michael Bell.

“Food manufacturers have been finding ways to retrain and redeploy existing staff to different areas of their businesses [alongside their recruitment campaigns].”

The loss of business from foodservice and hospitality outlets has affected many UK food businesses. For Mash Direct, it meant 30% of its business was put on hold with lockdown.

However, Hamilton said the spare volume resulting from this shift has been made up by a boost in sales - 28% in the first week of panic buying, according to the firm’s own figures - and a move into e-commerce, which has grown 4,000%.

Mash Direct is also planning to go ahead with NPD it put on hold when the outbreak initially hit - a new cauliflower bites SKU, which it hopes will begin rolling out to independents in the coming weeks.

“We had to rein back on our SKUs to train people up in light of the new safety measures needed in the current situation. Now, we’re in a position to relaunch them properly,” said Hamilton.