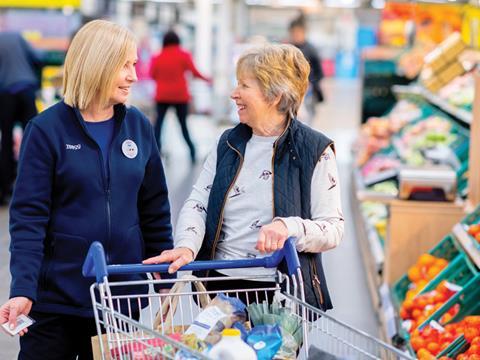 Tesco has revealed it plans to close counters in nearly 100 of its stores as part of a major overhaul set to affect up to 9,000 jobs.

The retailer said it believed new roles could be found for up to half of those affected by the changes.

It blamed the shake-up on a shift in shopping patterns and a continuing effort to make the business more efficient.

The biggest change will see about 90 stores close their counters, with the remaining 700 trading with “either a full or flexible counter offer” which could also see changes to the way they are run.

Tesco said the cuts would be focused on large stores to ensure they had the right offer for customers, who were shopping in different ways and had less time to shop.

The raft of changes was announced this afternoon by Tesco after reports over the weekend that up to 15,000 staff could lose their jobs in a shake-up.

Tesco said the reports had been “premature” but admitted large parts were true.

“In our four years of turnaround we’ve made good progress, but the market is challenging and we need to continually adapt to remain competitive and respond to how customers want to shop,” said Jason Tarry, Tesco’s UK CEO.

“We’re making changes to our UK stores and head office to simplify what we do and how we do it, so we’re better able to meet the needs of our customers. This will impact some of our colleagues and our commitment is to minimise this as much as possible and support our colleagues throughout.”

“After a number of trials, we have found a simpler way to conduct our store routines and will be rolling this out to all of our stores,” said a spokesman.

“These changes mean a significantly reduced workload, with fewer hours needed to complete the routines.”

Tesco said the plans would also involve simplification of its merchandising operations to cut down on store layout changes and free up staff to spend more time with customers.

“We want to make shopping with us even easier, and we know that when we move products around this can prove frustrating for customers,” said the spokesman.

“Our colleagues have also told us they want to spend more time with our customers, rather than moving products around the store. We’ve been working to reduce the amount of layout changes we make, so it’s easier for customers, and less work for colleagues, meaning fewer merchandising hours are needed.”

Today’s announcement also confirmed speculation that Tesco would be axing its staff canteens in favour of self-service vending machines, with a consultation also beginning on canteen jobs.

It said there had been a reduced demand for hot food, which was now available in only a third of stores.

“This change will impact the people working in our colleague rooms, who are employed by third party caterers, and we are working with them to provide as much support as we can,” Tesco said.

Other changes will also affect Tesco’s head office, despite a wave of recent cuts.

Tesco said they would help it move to a “simpler and leaner structure”.

However, Tesco denied reports it was planning major changes to its bakeries as part of the shake-up.

“Contrary to media reports over the weekend, we do not plan to make any significant changes to bakeries this year.”