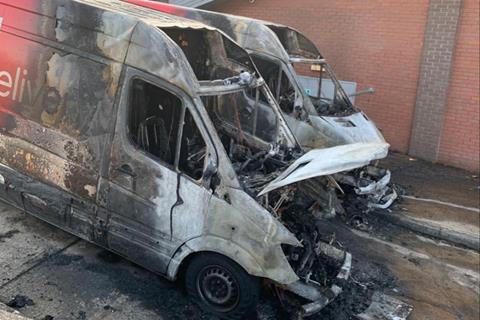 The vans were set alight outside Iceland’s Southmead stores following clashes between youths and police.

“Disturbances broke out in the Southmead area of Bristol at around 9.30pm last night, following the prime minister’s address to the nation,” said an Iceland spokesman.

“Police riot vans were called out and youths threw missiles at the police as they tried to disperse them.

“Later in the evening the two home delivery vans parked outside our Southmead store were set alight and the fire brigade attended to put out the fire. The vans will both have to be written off. We believe this to be an act of mindless vandalism rather than a targeted attack on Iceland.”

Avon and Somerset Police confirmed two Iceland vans had been destroyed by fire.

Neighbourhood chief inspector Mark Runacres said: “Just hours after the prime minister announced everyone in the country should stay home to save lives it is beyond belief anyone would be so reckless and thoughtless.

“Officers were already patrolling the area following recent instances of anti-social behaviour (ASB) and we’ll continue to do so.”

2 of our vans in Southmead were burnt out last night during disturbances in the town. At a time when home delivery is literally a lifeline for some vulnerable people, this is sickening. pic.twitter.com/rctNiIkRia

Tweeting about the vandalism, Iceland MD Richard Walker said: “At a time when home delivery is literally a lifeline for some vulnerable people, this is sickening.”

Iceland’s spokesman added: “While we can and will bring in replacement vans to maintain our home delivery service in Southmead, our entire van fleet is running at absolutely full capacity at the moment, and it is shocking and distressing that anyone would act so callously to put vehicles out of service at precisely the time when they are most needed to deliver food to the most vulnerable people in our society.”

Johnson had just told the country to stay at home except for essential trips, such as for food and medicine.