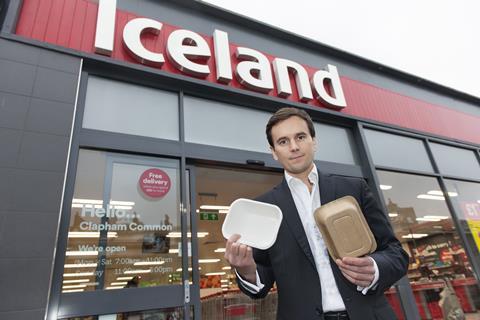 ’The scale of the challenge we have taken on is huge, partly because of the lack of alternative solutions,’ said Walker

Iceland has already eliminated nearly a third of plastic packaging, more than three years ahead of its deadline for banishing it altogether from its own-label products.

The frozen food chain’s MD Richard Walker announced its latest milestone in its journey to plastic-free packaging by the end of 2023 at The Grocer Conference in London today.

Annual plastic use had been cut by 29% since it made the pledge at the beginning of 2018, he said. The total eliminated to date added up to 3,794 tonnes.

Iceland was the first – and remains the only – major UK supermarket to pledge to get rid of plastic completely from own-label ranges.

Recent innovations include a trial of cardboard and paper packaging on swathes of fresh fruit & veg, reducing plastic by a claimed 93% across 38 lines.

None of the costs of the efforts had been passed on to customers, according to the retailer.

“We received overwhelming support from the public when we announced our commitment back in January 2018, and I’m enormously proud of the progress we’ve made over the past two years,” said Walker. “To have removed 29% at this stage is a real milestone in our journey and we continue to innovate and develop, week by week and tonne by tonne.

“The scale of the challenge we have taken on is huge, partly because of the lack of alternative solutions in some instances, the infrastructure in the manufacturing industry, which in many cases is built around plastic usage, and of course the fact that we are the only retailer to have made a ‘totality’ commitment.

“Whilst we have seen a promising shift away from plastic usage across the industry and a significant increase in consumer awareness of the issue since the beginning of 2018, we remain the only retailer to have made this pledge. We’re now looking ahead to the next phase of our journey, whilst continuing to engage our customers by finding scalable and user-friendly solutions, truly democratising choice to make sustainable packaging options an affordable reality for everyone.”

Collaboration with almost 100 own label suppliers had been key to progress, which had also seen 74 frozen meals switched from black plastic to paperboard-based trays, Iceland said. Some 400 suppliers had been invited to get involved.

The company had set up working groups with suppliers to establish a development plan for “each and every line”.

Walker is among a wealth of high-profile speakers at The Grocer Conference, which this year is focused on purpose.