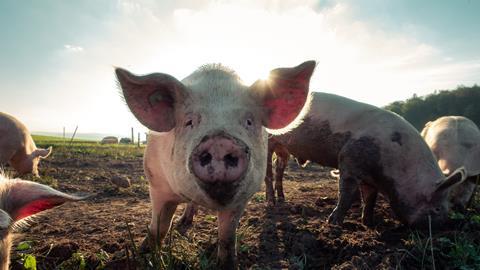 Why are chlorinated chicken and hormone-treated cows so contentious? And what problems do they pose for British farming?

When it comes to post-Brexit trade deals, few issues have grabbed public attention quite like chlorinated chicken and hormone-treated cows.

The debate stems from widely held concerns that the government is planning to abandon European standards and align itself instead with the US, thereby allowing products of a lower standard to enter the UK and undercut British farmers.

There’s a clear reason for these concerns. The US has made clear that if the UK wants a trade deal, it must abandon Brussels’ standards on food safety, animal welfare and environmental protection, and align itself instead with those set in Washington.

The government insists it has no intention of lowering standards, but its decision to vote down amendments to the Agriculture Bill that would enshrine standards in law has inflamed concerns they are preparing to trade them away.

But the issue is far wider than chlorine washes and hormone treatments, and applies to a plethora of potential animal welfare and environmental issues coming down the line for the UK. So what exactly is the debate over food standards all about?

What exactly are food standards?

First and foremost, it is important to distinguish between food standards and production standards. Or to put it another way: product vs production.

Product standards ensure that goods on public sale are safe for consumption. For food in the UK, this is overseen by the Food Standards Agency, which ensures all goods meet criteria such as labelling ingredients and allergens, or not exceeding certain levels of additives and preservatives.

Production standards, on the other hand, focus on how the product is made. For food, this most often covers animal welfare and environmental protections. The UK has banned veal crates, for example, not because they result in unsafe food, but because of animal cruelty concerns.

What about chlorinated chicken? What’s the issue there?

Chlorinated chicken is safe, according to both US and EU regulators. The USDA has approved numerous antimicrobial rinses for use in poultry processing while EFSA, the European food safety regulator, examined the use of chlorine treatment and concluded “chemical substances in poultry are unlikely to pose an immediate or acute health risk for consumers”.

In fact, the US often does well across the board when it comes to food safety, according to the Global Food Security Index compiled by the Economist Intelligence Unit. The ranking, which judges each country on the “quality and safety” of its food, placed the US in fourth place globally. The UK was 17th.

The issues with chlorinated chicken stem from the perceived standards under which it is produced. Many Europeans argue the use of chlorine disincentivises proper hygiene practices and therefore lowers the welfare of the chickens.

Other foods attract similar allegations. While the UK banned sow stalls, which tightly confine the animal, for example, the practice is permitted in 41 US states. The food produced by this method is safe, but the ethics of it are frequently challenged.

So why can’t we just ban it?

This is where it gets tricky. While countries can legally ban imports because of their product standards – if it’s unsafe to eat, for example – they typically cannot do it due to their production standards. The UK may therefore find it challenging to ban foods such as chlorinated chicken and hormone-treated beef if it fails to strike a deal with the US.

There are, however, signs that this is changing. In 2013, the World Trade Organization upheld an EU import ban on clubbed seals as it was deemed necessary to address “public moral concerns”. It was a landmark case that hinted at a future in which products could be banned under production standards, not just product standards.

The EU-Mercosur trade agreement is also set to include animal welfare requirements as a precondition for food imports for the first time. The deal includes a clause that the EU will import eggs from Brazil, Argentina, Paraguay and Uruguay tariff-free, but only if they are produced under equivalent EU standards of animal welfare.

Many point to the EU-Mercosur deal as a game-changing step forward to allow countries such as the UK to insist on foreign producers complying with their own production standards.

Not quite. The issue for foreign producers is how they can demonstrate they are meeting the equivalent version of the UK’s standards. Each country’s standards are determined, at least to some extent, by their geographical and environmental factors. So what may be suitable for the UK could be impractical or even environmentally damaging for others. How you compare standards across countries is a notoriously tricky issue. How can you judge whose approach is better and why?

Another question is how the UK would monitor compliance. Assurance schemes such as Red Tractor aim to set a high standard for British meat, but it is difficult to see how they could extend their inspections and monitoring to foreign producers.

It all gets very tricky, very quickly.

What other solutions are there?

Henry Dimbleby, the government’s food tsar and author of the National Food Strategy, is among those advocating for a ‘dual tariff’ mechanism that would apply higher tariffs on food imports produced to lower standards than allowed in the UK, thereby making such goods prohibitively expensive.

The UK could try to push this mechanism in trade negotiations, though some believe it could be a difficult term to secure. It would not only limit the access of that country’s products, but they would, in effect, be conceding that some of their standards are inferior to the UK’s.

Another option is to allow greater oversight of the UK’s trade deals. Both the Trade and Agriculture Commission and MPs have been posited as authoritative and competent bodies for this purpose, but neither have so far been granted the comprehensive oversight they desire. The Commission is due to be disbanded in January, while some MPs have complained they will only have 21 days to examine a trade deal document that can typically exceed 1,000 pages.

Many hoped either the Agriculture Bill and the Trade Bill would be places to include this oversight, but so far, there has been no change.

That is the concern of many British farmers. They fear that even if the UK maintains bans on chlorine washes or certain hormones, lower welfare standards in the US enables their farmers to produce at a lower cost, thereby enabling them to undercut British producers. The NFU has repeatedly insisted British farmers must be allowed to compete on a level playing field.

Meat is certainly cheaper in the US. According to the EU’s Meat Market Observatory, European pork is about twice the price of its American equivalent, while beef costs 16% more on the continent. This cannot be purely attributed to different standards, however. US farms are also typically much larger, with herds of pigs and cows often extending into the tens of thousands.

So what’s going to happen? Are UK standards going to change in order to land a US deal?

That’s the big question that Boris Johnson and his government must decide. It’s a tough one, with extensive political ramifications regardless of which option they take.

Trade deals inevitably lead to winners and losers  – and there is an argument for British farming to take the hit. What is most frustrating to many farmers, however, is that the government has not yet even admitted this is the case.