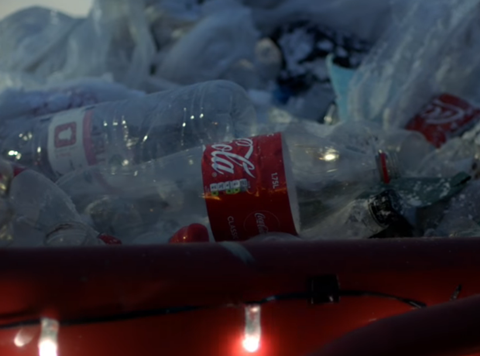 There’s a new enemy in the war on waste: single-use plastic.

As carrier plastic bag usage has come down with the introduction of a plastic bag tax (supported by The Grocer), The Daily Mail, The Guardian and Sky have all ratcheted up coverage of the scourge of plastic in recent months, while viewers of the new Blue Planet II series (including the chancellor) have watched aghast as David Attenborough demonstrated the horrific impact of plastic waste on marine life.

A new Greenpeace ad sums up the situation darkly (and brilliantly). Inverting the Coca-Cola Christmas truck tour ad, a driver dressed in a Santa outfit reverses a truck full of discarded bottles on to a beach, and deposits the lot in the sea.

To be fair, Coca-Cola European Partners has actually been an outspoken supporter of the Deposit Return Scheme. But the numbers around plastic waste are horrific. As the Greenpeace ad says: a truckload of plastic enters the sea every second.

Now, via his Autumn Statement, the chancellor has promised to look at a potential tax on single-use plastic (including plastic soft drink bottles, takeaway boxes and bubble wrap).

If it’s implemented in the right way it could really help. First it could help fund initiatives such as DRS but also a unified national waste recycling collection, to reduce litter and increase recycling. (While it’s about it, the government should consider a ban on black plastic, as it can’t be recycled, while the industry buries its head in the sand.)

And you never know: while it’s unlikely those cardboard bottles, so reminiscent of hospital urine containers, will catch on any time soon, a tax might encourage retailers and manufacturers to use other packaging materials more, such as cardboard, paper, glass, steel and aluminium, all of which have better environmental credentials, and to innovate more.

A few years ago it became received wisdom to measure environmental impact only in terms of C02 emissions, ignoring sustainability and recyclability altogether. A bit like attitudes to diesel, that thinking looks increasingly flawed.