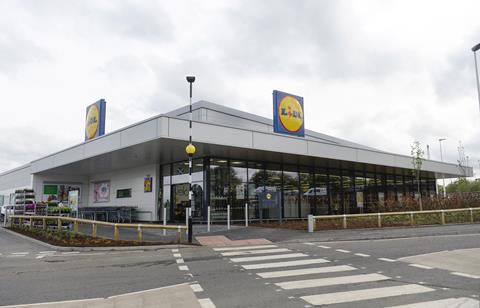 The Lidl store in Paisley opened earlier this year

Lidl plans to open 12 new stores in Scotland over the next three years, in moves set to create about 500 jobs.

The discounter has also announced plans to regenerate eight existing Scottish stores, including extensions and relocations.

The stores will be supplied by a new 600,000 sq ft distribution centre in the Eurocentral industrial estate near Motherwell, North Lanarkshire, due to be fully operational by November this year.

Construction is already underway of new stores in Dumbarton, Dundee, East Kilbride, Cowdenbeath and Larkhall. Branches in Alloa and Bathgate, opened in 1995 and 1999 respectively, are among those set to be relocated to bigger sites nearby.

The expansion will see Lidl’s store estate in Scotland grow to 110.

The new Eurocentral DC will be Lidl’s largest in the UK, and will replace its existing Scottish warehouse in Livingston.

“Since opening our very first store in Scotland 25 years ago, we’ve opened our doors to towns and cities across the country, employing more than 2,200 people,” said Lidl regional director for Scotland Ross Millar.

“We’re incredibly excited by our ambitious growth plans, and in particular the opening of our 100th store next year, which reinforces our commitment to creating new jobs and providing communities with quality produce at prices that are affordable for everyone.”

Lidl has around 760 stores and 13 distribution centres across the UK. The discounter last month announced plans to open 40 new stores across London, including its first in the centre of the city, in a £500m expansion push.