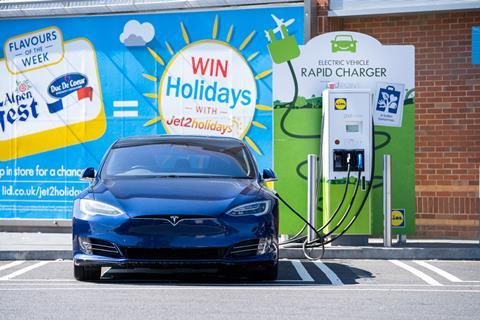 Lidl has become the latest supermarket to commit to creating a network of electric vehicle charging points in its store car parks.

The discounter has pledged to install rapid chargers at all its new stores, as well as retrofitting them at some existing branches.

The £25m investment will see 300 stores, or a third of Lidl’s UK estate, equipped with the technology within three years. They are already in place at more than 40 stores, Lidl said.

Installing them in every new leasehold store will “ultimately depend on landlord approval” but Lidl will “take all possible steps to ensure that agreements are put in place” to do so, it said.

Lidl also claimed the charging points would offer the best value on the market at 23p per kilowatt hour.

Lidl GB chief development officer Ingo Fischer said: “We are committed to tackling the environmental concerns that our customers care most about, whilst giving them access to solutions that will support them in their ambition to lead more sustainable lives.

“Not only will our customers be able to charge their electric cars in 50 minutes - less time than it takes to do a big shop - they will be able to do it for the best price on the market.

“It is our hope that, through this significant investment, we will enable easier access to charging points, ultimately helping more households switch to electric vehicles.”

The points are to be operated by Pod Point and can be used via the company’s Open Charge mobile app. Stores with charge points can be viewed via the Lidl app.

The move comes after Morrisons announcement last week of plans for a nationwide network of high-speed electric car charging points at its stores, with 100 to be in place by next year.

That followed the announcement of government plans to introduce green number plates for electric cars, making it easier for local authorities to offer incentives such as cheaper parking. The government hopes it will boost electric car sales and contribute to the target of net zero emissions by 2050.

Tesco is also rolling out charging points. In November last year, the supermarket announced a deal with Volkswagen to install 2,400 charging bays across 600 stores.