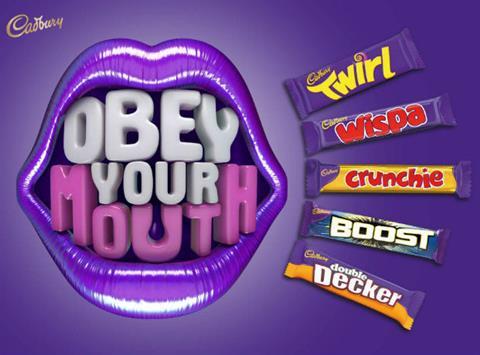 Mondelez is to support its range of Cadbury chocolate singles with Obey Your Mouth, a multimillion campaign that will see Crunchie’s first new TV ad in 16 years.

Beginning on 9 May, the push is set to run for three years, with the first year expected to cost £6m alone. It will use a mix of television, outdoor, in-store, PR and digital to promote the brand’s top-selling bars: Crunchie, Wispa, Double Decker, Boost, and Twirl, the UK’s most popular single chocolate bar [Nielsen 52 w/e 19 March 2016].

“This campaign is aimed at showing consumers, no matter what your mouth is desiring, Cadbury has the one for you,” said brand manager Barbora Hrdlickova.

She added that it would be “fantastic” to see Crunchie back on telly in its first new campaign since 2000’s Ron starring comedian Marcus Brigstocke.

“We’ll be letting young adults experience the joy that comes with the end of a working week through new channels such as Snapchat, where we’ll be launching sponsored lenses for Crunchie on three consecutive Fridays,” said Hrdlickova.