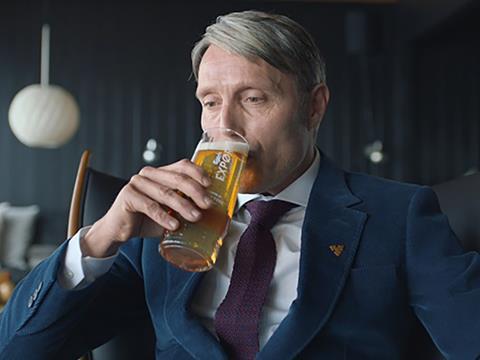 Carlsberg has embarked on a £15m push emphasising its Danish heritage as it looks to revive flagging UK lager sales.

The campaign marks the start of a “bold new marketing approach” for Carlsberg in the UK and launched officially this week with the screening of a TV ad featuring actor Mads Mikkelsen.

The Doctor Strange star plays the role of a Danish philosopher “pondering the secrets to his nation’s happiness” as he takes viewers on a tour of Copenhagen, a Danish apartment and a ‘hygge’ forest picnic, before arriving at the Carlsberg brewery for a pint.

The full 60-second version of the ad hit screens on 21 April at 9pm on Channel 4, after Carlsberg staged a ‘takeover’ for the day, turning the Channel 4 logo into the Danish flag.

It follows new Denmark-themed packaging rolled out across the Carlsberg and Export brands in February, with “wider out-of-home, experiential, digital and social activity” planned throughout the year - including a partnership with mobile app Shazam.

Carlsberg, which has seen UK sales plummet since its 2015 delisting by Tesco, said it wanted to confront “the long-term decline in the lager category” and help beer drinkers “reappraise the brand” through its Danish provenance.