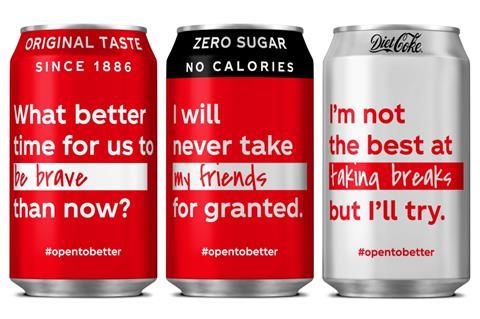 Coca-Cola has temporarily ditched its iconic logo from certain cans as part of a new campaign called ‘Open To Better’.

The soft drinks giant has replaced the Coca-Cola logo on limited-edition cans of its core, Diet and Zero Sugar SKUs, as part of a push designed to “inspire people to embrace change and pledge to do things differently in 2021”, said the brand.

In place of the logo, phrases such as ‘I will never take my friends for granted’ and ‘No more excuses, our idea is happening’ will adorn the cans.

The pledges were contributed to the campaign by celebs such as Marcus Rashford, Alex Scott, Laura Whitmore, and AJ and Curtis Pritchard.

Coca-Cola GB marketing manager Bryony Lester said the push would “use the power of our packaging to share resolutions of hope and positivity that we hope fans will enjoy sharing with their friends and family”.

As well as in-store, shoppers will be able to buy the cans from a dedicated online store.

It comes just weeks after Coca-Cola kicked off a massive review of its media, creative planning and buying practices, which will see all of its media and advertising agency hires and commercial relationships scrutinised across the world.