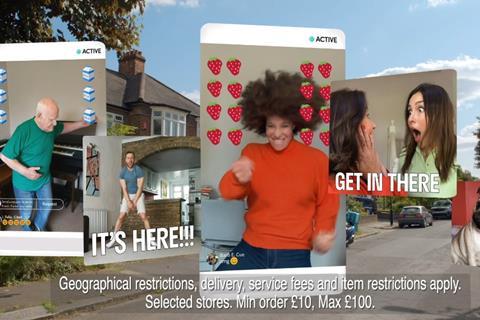 It is the first time Deliveroo has promoted grocery in ads

Deliveroo is boosting awareness of its grocery partnerships with tv ads promoting the availability of Co-op and Morrisons products on its platform.

The two ads will run concurrently on Sky, Channel 4, C4 digital and ITV until 31 August.

“Get your everyday essentials delivered from your local store, straight to your door in as little as 30 minutes,” the Co-op ad states, while the Morrisons version highlights the rapid delivery of “barbecue essentials”.

It is the first time Deliveroo has promoted grocery in ads; previous ads have focused on restaurant and fast food partners.

Morrisons announced an expansion of its partnership with Deliveroo in April, allowing customers to order from 70 essential household items which are delivered from more than 130 Morrisons stores across the UK. The service – which Deliveroo claimed can reach one in four households – will be “for the duration of the Covid-19 crisis”.

Co-op’s Deliveroo partnership has been in place since 2018, initially trialled from a handful of stores in Manchester. The service has since been extended and is now offered from 400 Co-op stores after 128 stores were added this year. This makes Co-op the most widely available supermarket on the Deliveroo app.

Around 600 products are available. The average delivery is 1.7km away from the store, and the top four cities for order count are London, Manchester, Leeds and Brighton.

Deliveroo and Co-op said customers were increasingly placing larger orders and ordering more frequently, with the most popular times on Friday and Saturday early evening.

They added that since March customers had been buying more fresh produce on the platform, with strawberries and bananas the most popular food items. The top alcohol choice has been Co-op’s Irresistible Prosecco.

“We are offering speed, flexibility and choice with on-demand, online convenience meeting consumer needs in our communities. We have accelerated our plans to roll out online delivery through our own online store and with partners,” said Chris Conway, Co-op head of ecommerce.

“Products are selected locally by Co-op stores which act as micro-distribution hubs and so also benefit from the significant increase seen in demand as consumer shopping trends change in the wake of Covid-19 and more people shop for food online,” he added.

Several supermarkets and convenience retailers have come on to the Deliveroo platform this year, including M&S, Aldi and McColl’s.