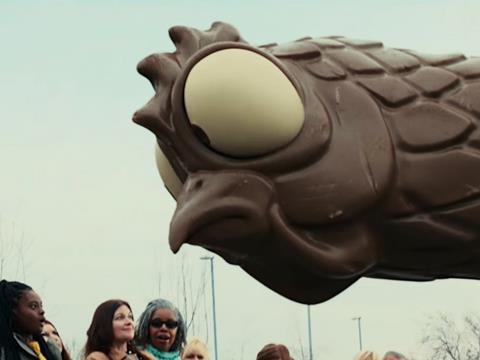 Entertainment and in-store theatre are taking centre stage as retailers ramp up their efforts to lure in shoppers in the run-up to Easter.

Asda this week kicked off a major Easter push with a new 60-second ad featuring a 30 ft chocolate hen that climbs to the roof of an Asda store to lay giant chocolate eggs for its customers.

Created by VCCP, the ad will run on TV throughout the Easter period and will be accompanied by press, outdoor, radio and social. A spoof news channel has been created for Asda’s website, with clips of news anchors Shaun Shawn and Peter Bird reporting on sightings of the giant bird.

Premium retailers like Booths and Selfridges, on the other hand, are going big on in-store theatre. Booths is set to stage a mini-festival at three of its stores to celebrate the artisan chocolatiers who make its Easter chocolate products.

The festival, kicking off at its Garstang and Lytham branches on 18 March and Hale Barns the following day, will include opportunities for shoppers to meet producers, indulge in wine and beer matching, and make coloured chocolate slabs as Easter gifts.

Selfridges, meanwhile, is ramping up in-store theatre with a giant chocolate ‘dragon’ egg for its Easter push and to mark the Blu-ray and DVD release of Game of Thrones: The Complete Fifth Season. Chocolatiers from high-end brand Melt will assemble the creation in store on 12 March, where it remained on display until 4pm to provide “selfie opportunities”.

Elsewhere, Lidl is focusing its Easter marketing activity on a new version of its ‘Surprises’ campaign, which went live this week and features a school organising an Easter egg hunt.