Freixenet Barcelona contest nothing to wine about 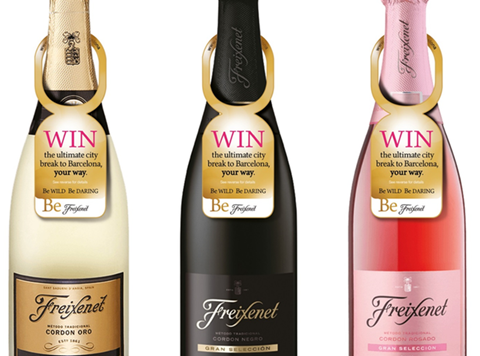 Freixenet is giving away a trip for two to its home city of Barcelona in a promotion running across its Cordon range.

From June to September, bottles of Cordon Oro, Negro and Rosado will feature a neck hanger offering shoppers the chance to ‘Win the ultimate city break to Barcelona, your way’. The hangers will give a URL where consumers can enter the competition.

The winner will receive a trip for two to the Spanish city, including flights, 4-star accommodation for three nights, £300 spending money and a VIP tour of the Freixenet vineyard and cellars. They will also get to choose from activities including a private cookery lesson, a private cruise on a yacht, and a helicopter ride over the city. Runners-up will win a bottle of Freixenet.

The messaging is designed to tie in with the brand’s Be Freixenet campaign, launched last year. The promotional bottles will be available from retailers including Tesco, Sainsbury’s, Asda and Morrisons.