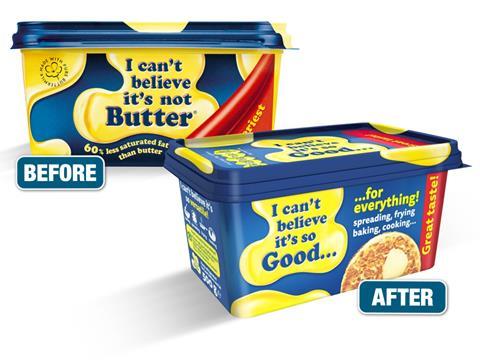 Unilever UK has given its spreads brand I Can’t Believe It’s Not Butter a new name in a radical overhaul to revive its flagging fortunes.

The supplier has renamed the brand I Can’t Believe It’s So Good for Everything, and is supporting the relaunch with a £1m spend, which will include a TV ad campaign from March. New packaging started rolling out in Asda and Tesco last week.

Unilever said the new brand name would help “drive awareness of the product’s versatility and great value”, and convey the message the spread could satisfy “a range of consumer needs, from spreading and cooking to baking and frying” - something that would be communicated on pack with rotating “inspirational recipe” images throughout the year.

The new campaign would also communicate that the product was “a healthier choice for shoppers”, Unilever said and, in a similar vein to stablemate Flora’s revamp last year, would accentuate its plant-based credentials.

I Can’t Believe it’s Not Butter was first launched in the US by JH Filbert in 1981. Unilever acquired the brand in 1986 and launched it in the UK in 1991 as a low-fat alternative to butter. It was among the UK’s bestselling spreads by the mid-1990s. However, the brand has struggled to keep pace over the past decade as shoppers have shifted from spreads and back to butters.

“We know our consumers want value for money in spreads,” said brand manager Pedro Costa. “Our brand evolution to take on a new name helps to drive home the fact that this product is unbelievably versatile and a healthier option.”