Japan Tobacco International has rejected an Advertising Standards Authority ruling against one of its ads and is taking its case to the ASA’s Independent Reviewer.

The advertising watchdog ruled today that a JTI press ad which appeared in April 2013 misleadingly implied that, at the time the ad appeared, there existed no evidence to support the introduction of plain packaging for tobacco products.

The ad featured an email from the UK Department of Health to the Australian Department of Health and Ageing in 2011. The email stated “I work on the UK government’s Tobacco Policy Team… you will be aware that the UK government is considering the introduction of plain packaging of tobacco products. As I’m sure you’re aware, one of the difficulties regarding this is that nobody has done this and therefore, there isn’t any hard evidence that it works.” 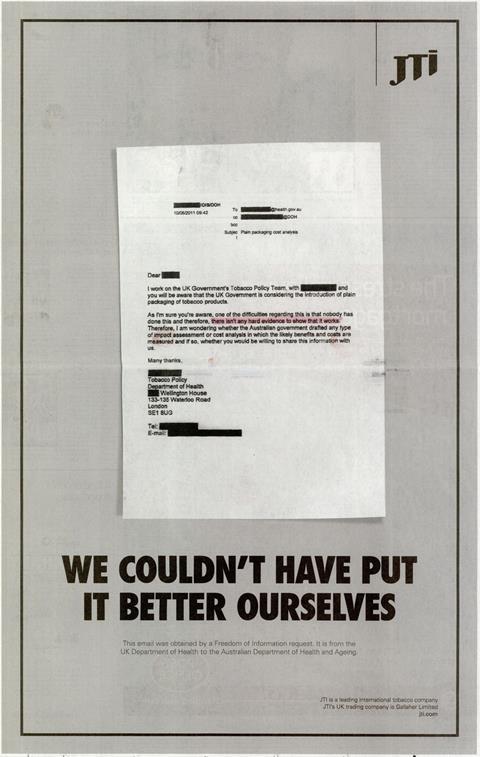 The line regarding the evidence was highlighted and text beneath the email stated “We couldn’t have put it better ourselves.”

In its response to the complaint, which was raised by 13 complainants, including Cancer Research UK, UK Centre for Tobacco Control Studies and ASH, JTI said the ad was intended to question the rationale of the DH’s approach in 2011. It pointed out that, at the time the ad appeared, JTI’s UK MD Martin Southgate publicly stated: “We are using this campaign to demonstrate that in 2011 even the DH accepted that these proposals are supported by any hard evidence.”

The ASA said the presentation of the information regarding the date of the email was not made clear and readers would consider the reference to a lack of evidence as relating to the position at the time.

It claimed the email was not a definitive statement of the DH’s position at the time and did not reflect its view at the time the ad appeared. It also concluded that between the date of the email and the publication of the ad various studies had been published that did provide evidence to support plain packs.

However JTI today rejected this conclusion and claimed there was still no hard evidence to suggest plain packaging worked.

“It was not misleading to reprint, in full, an email written by DH. With just over a week to go before the end of the third UK consultation on plain packaging, there still isn’t any hard evidence to show that it works,” said JTI UK managing director Daniel Torras.

“Recent data from Australia reinforces the fact that plain packaging has not had a positive impact there. It is the recent claims – by the same groups who complained to the ASA – that are plainly misleading. It is untrue to suggest that plain packaging has caused a ‘huge drop’ in smoking in Australia when the data shows that the rate of decline in smoking from 2010 to 2013 was consistent with the pre-existing trend.”

Torras called the ASA’s decision to publish its findings a week before the government concludes its latest review on the matter “staggering”.

It is now taking the case to the ASA’s independent reviewer, Sir Hayden Phillips, who earlier this year confirmed that JTI’s claims in a previous advert were substantiated.