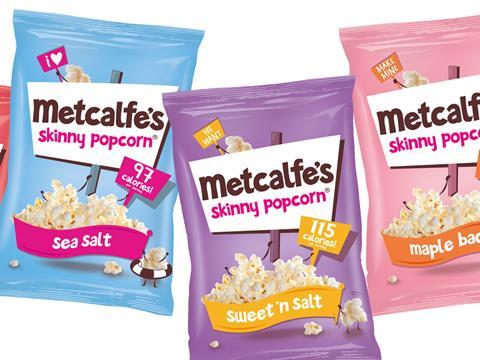 The owner of Metcalfe’s Skinny Popcorn is facing a legal battle with a rival popcorn supplier that wants to stop the brand from launching in the US.

SkinnyPop owner Amplify Snack Brands has filed a federal trademark infringement and unfair competition lawsuit against Snyder’s-Lance. Amplify said it had recently learned Snyder’s was seeking to launch Skinny Popcorn in the US.

The lawsuit was intended to halt “deceptive use and importation of popcorn products” copying SkinnyPop, the biggest popcorn brand in the US with annual sales of more than $200m.

The complaint alleges a launch would constitute “wilful infringement” of the SkinnyPop trademark and “an obvious attempt to confuse consumers”.

Tom Ennis, Amplify CEO, said: “We believe in fair play and fair competition. Snyder’s-Lance and Metcalfe’s effort to copy our brand name is flattering but not how trade competitors should behave.”

Alex Brodie, partner at law firm Gowling WLG, said Amplify would rely on the similarity of the names and the reputation the SkinnyPop brand enjoys “to argue consumers are and will be confused by another popcorn product on the market”. However, the Metcalfe’s name could be said to prevent confusion, she added.

The US case could also have repercussions in the UK, where SkinnyPop this month made its debut in Costa Coffee stores. Having had the name registered with the IPO since 2014, Amplify “seemed to be suggesting Metcalfe’s might also be in breach in the UK by selling popcorn under the name Skinny Popcorn”, said Sian Edmunds, head of the food & drink team at Burges Salmon.

“However, the fact Amplify has a registered but unused mark might not be enough for a claim to succeed.”