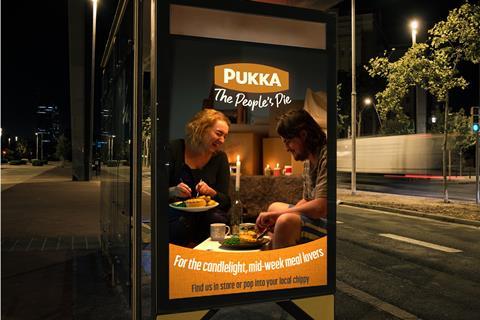 A TV ad will hit screens on 18 September

Pukka Pies is to kick off ‘The People’s Pie’, a multichannel push for its grocery and foodservice lines.

A TV ad will hit screens on 18 September, focusing on “everyday folk and their love affair with Pukka pies”. Set to run until the end of October, it was partially filmed at the brand’s bakery in Syston near Leicester.

With the “multimillion” campaign centred on real people, it was “an important thing to do” to feature Pukka employees, said the supplier’s head of marketing, Rachel Cranston. Other activity will include digital, in-store, OOH and social.

Pukka had “continually been driving growth in the hot pie category, but we’re not resting on our laurels” Cranston added. “There is still a huge opportunity to grab an even bigger slice of the pie market.”