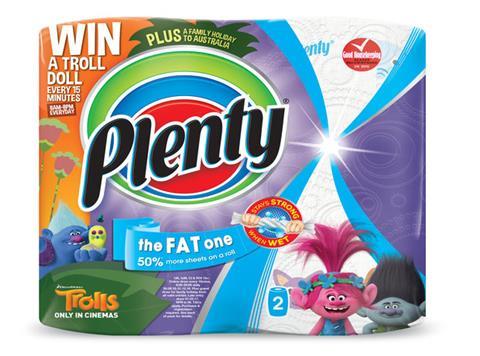 To mark the relaunch of Velvet following its ‘biggest-ever upgrade’, the toilet tissue brand is giving away 1.6 million twin-packs as part of a £1m sampling push, which will see more than 10% of UK families receive free rolls. The activity is being supported with a TV campaign expected to reach over 12 million families by Christmas, and will be backed by radio and digital.

“We are really excited about all of the upcoming developments for Velvet, and the end of 2016 looks set to be huge for the brand,” said Velvet senior brand manager Charlotte Parrish.

Meanwhile, Plenty is running an on-pack drive in a tie-up with the new Trolls movie from DreamWorks, offering a Troll doll every 15 minutes. Shoppers are required to enter their pack’s code into the household towel brand’s microsite Winplentytrolls.co.uk for a chance to win.

All entrants’ details are added to a grand draw on 5 January, which will see one person bagging a two-week family trip to Australia’s Gold Coast. The Plenty promotion will run until 31 December.