Shaws of Huddersfield plays up history with redesign 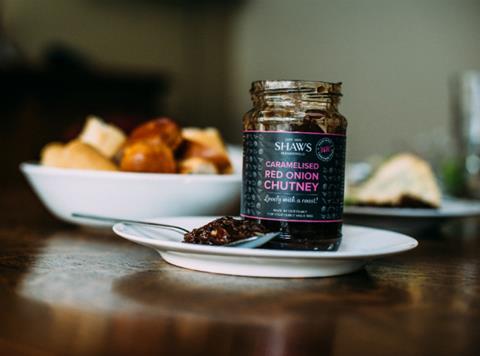 Shaws of Huddersfield, the chutney and relish maker, has given its core range a refresh to focus on the business’ 128-year heritage – ahead of NPD and a brand mascot.

Set to land on shelf from next month, Caramelised Red Onion Chutney in a 310g jar (rsp: £1.20) will be the brand’s ‘signature’ product. It will be the first to feature Mr Pickles, the new mascot dressed in traditional Huddersfield cloth and based on Walter Shaw, son of company founder George and the man credited with the brand’s early success.

The latest product will join recent release Mighty American Style Relish in Shaws’ ‘everyday’ lineup – which has been given a new look with emphasis on the brand’s history. The label’s colours have been lightened and a ‘since 1889’ strapline has been added to the front along with ‘foodie cues’, while Walter Shaw’s picture and signature appears on the reverse. ‘Yorkshire-speak’ has also been added, including Mr Pickles on the lid promising the contents are ‘proper tasty’.