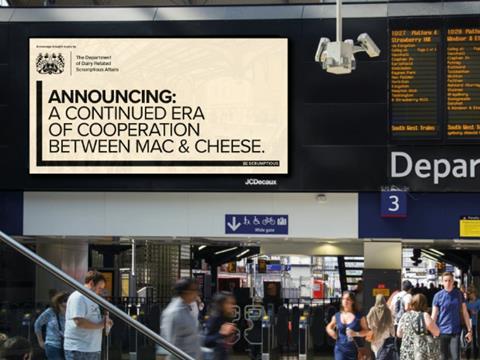 Dairy UK and the AHDB have announced a revamp of their spoof public service announcement campaign.

It follows new appointments to its membership with the winner of the first season of The Great British Bake Off, Edd Kimber, becoming the Department’s head of butter, while blogger Irene Lara has taken up the role of director of cheese (hard). Further announcements on who is set to become head of soft cheese, ice cream ‘cone-oisseur’ and minister for milk were also on the horizon, said Dairy UK CEO Judith Bryans.

The campaign had been well received so far, added Bryans, with 1.1 million views of its recruitment adverts for roles within the DDRSA. While the Department’s Instagram page has 230 followers, its ambassadors had up to 746,000 followers at the time of writing.

Despite the change in name, there would be no change in direction, said Bryans. The marketing push is set to up the ante from next month, with “large scale” tube and transport hub advertising, on-demand video content and web and social media advertising.

“The campaign remains focused on taste and the joy of dairy, we’re simply keeping it fresh. Our consumer testing shows that people really like the adverts - in fact the quirkier and more humorous, the better,” said Bryans.

Bryans made the announcement at the Semex conference in Glasgow where she also launched new marketing toolkit Tell It Like It Is, a joint venture between the AHDB, the Dairy Council and Dairy UK.

The online toolkit came in response to Dairy UK’s research, which showed 65% of consumers wanted to interact with farmers producing dairy products, said Bryans. The kit, which will be updated monthly, featured emojis, infographics and social media training for farmers to promote the nutritional benefits of dairy, she added.

It was welcomed by NFU dairy board chairman Michael Oakes as a “proactive and modern opportunity” for the dairy industry to interact with its consumer base.

“This is a really positive move to allow farmers to get involved in promoting the industry,” he said. “It will allow farmers to be sure of the facts and encourage those who are wavering on dairy consumption to choose dairy.”