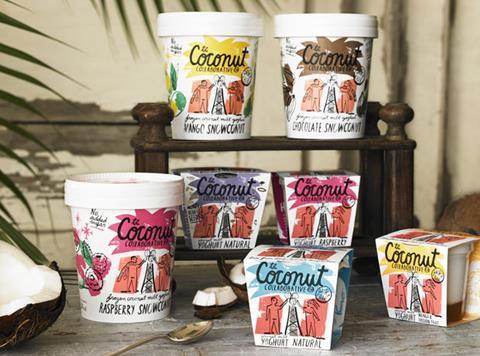 The business is this month rolling out its coconut-based yoghurts - which are free from dairy, soya and gluten – to 70 Franprix and 75 Monoprix stores in France. The retailers are initially carrying the brand’s 120g blueberry; berries & seeds; and mango & passion fruit yoghurts, and from the end of this month will also sell its frozen ‘Snowconut’ yoghurts.

France had the largest yoghurt market in Europe, said Averdieck, who claimed his brand would be the first coconut milk yoghurt to launch into French stores. The coconut-based yoghurts made their French debut with a listing in 23 Cojean restaurants in January.

“Our expansion marks the next chapter for The Coconut Collaborative, and we believe the French market is prime for healthy alternatives to every day food choices,” said Averdieck. “We are very pleased to have secured the support of Franprix and Monoprix and this is just the start of wider roll out in France, with other major retailers set to launch in the autumn.”

The Coconut Collaborative launched in April 2014, and is available from UK retailers including Sainsbury’s Local, Waitrose, Tesco and Ocado. The range comprises four 120g yoghurts (rsp: £1.49-£1.99) in natural; mango & passion fruit; raspberry; and berries & seeds (natural with a portion of seeds and berries) and 500ml tubs of frozen Snowconut yoghurt (rsp: £4-£4.99) in vanilla & coconut; raspberry; chocolate; and mango.