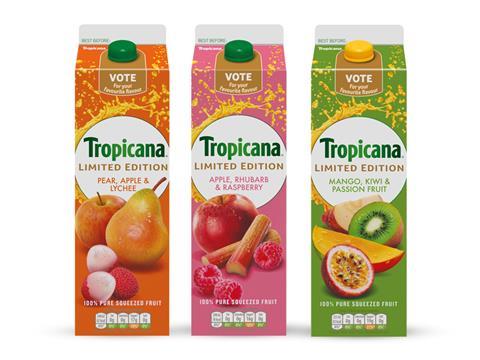 Tropicana is to put three limited edition juices up for public vote, to decide which will become a permanent fixture of the brand’s portfolio.

The push will be supported by digital advertising featuring Tropicana’s Little Glass character and details of the voting mechanic. It will run until March 2018, with the winner announced via Facebook in April.

The ballot follows that of fellow PepsiCo brand Walkers – which launched Choose Me Or Lose Me in July, pitting UK core variants Salt & Vinegar, Prawn Cocktail and Smoky Bacon against popular overseas challengers Lime & Black Pepper (from Australia), Paprika (Spain) and Bacon & Cheddar (US). The losing flavours will be axed in “a bold move” according to Walkers.

Tropicana “wanted to recreate this excitement and bring some innovation to the chilled fruit juice category” said Caroline Wilding, marketing manager for juices at PepsiCo. “With three limited edition varieties to choose from, we have created delicious, distinctive blends, which bring an entirely new flavour offering to the category.”