Weetabix debuts Jack and the Beanstalk ad in £10m push 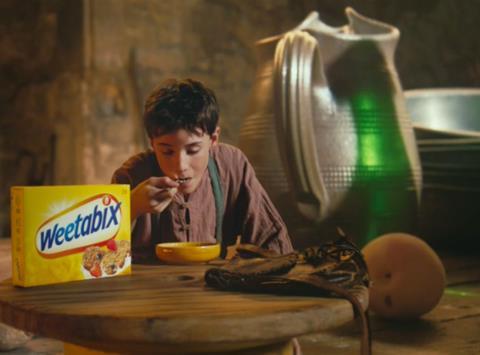 Weetabix is resurrecting its ‘Have you had your Weetabix?’ strapline as part of a £10m campaign that will make its debut tonight.

Premiering across ITV, Channel 4, Channel 5, Sky 1, Sky 2 and Sky Atlantic, the new commercial is a pastiche of Jack and the Beanstalk. It shows the fairy tale’s titular character scaring off the giant in his own castle.

The ad will run until the end of August, airing between high-profile shows including Coronation Street, Emmerdale, Ant & Dec’s Saturday Night Take Away, Gogglebox, The Voice, The Simpsons, and Family Guy.

As part of the promotional activity, the cereal’s packaging has undergone a “bold” redesign with a “Nation’s Favourite Cereal” flash added to the box.

“We were the only top ten cereal to have witnessed growth in 2016, driven by a healthy range,” said Kevin Verbruggen, head of brand at Weetabix – which has seen value sales rise by 0.9% [Nielsen 52 w/e 8 October 2016].

The campaign and refresh come as the cereal’s UK owner, also called Weetabix, is set be sold in a £1.5bn auction, with US food group Post Holdings apparently leading the bidding.