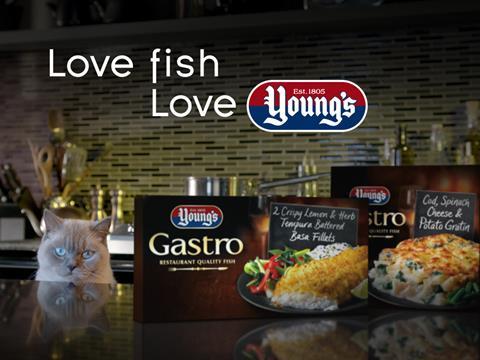 Young’s Seafood is hoping to revitalise the frozen fish category with a major new marketing push it described as a sign of the progression of the brand and of owner Findus Group.

The multichannel campaign kicks off on Monday (12 January) with the supplier’s first TV ad since 2011, and features Malcolm - a “discerning foodie cat” voiced by actor Rupert Everett.

The campaign would show why frozen fish was so good and signified the continued progression of the brand and of Findus Group as a whole, said group CEO James Hill.

Hill added Findus Group was making a comeback after a turbulent period dominated by “talk of financial meltdowns and Horsegate.” He said the past two years had seen it refinance the business and acquire Belgian frozen potato brand Lutosa, while group turnover and group profit had both increased for the second consecutive year.

However, the overall frozen fish category had fallen 0.5% in value [Kantar Worldpanel 52 w/e 17 August 2014], with battered fish and breaded fillets down 7.2% and 3.5% respectively.

“There is a significant opportunity to encourage people to try a broader range of seafood with NPD and our new campaign,” said MD Wayne Hudson, describing the activity as the start of a new era for Young’s. The first wave of activity will focus on Gastro.