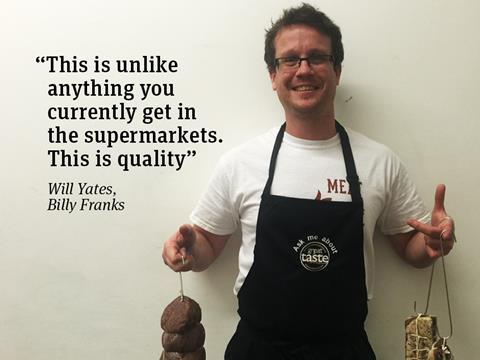 We all know about craft beer. Well this is craft jerky. Will Yates quit his job as a web designer in 2014 to concentrate full time on his passion: creating quality jerky from prime cuts of grass-fed native cattle, just like they do back in Texas, where he spent part of his childhood. Within a year he’d turned over £75k, selling to customers including Selfridges, Whole Foods Market and the Brewdog chain, where Franks sells for between £2.99 and £3.99 a pack.

Now, with £186k drummed up through from a crowd funding scheme in his back pocket, he’s expanding his manufacturing in East London’s Hackney Wick and taking on staff to increase distribution, with a view to breaking into the supers.Quality comes at a price, of course. Prime, pasture -fed beef carries a hefty premium so Yates says as he increases output, savings are likely to come not from procurement of raw materials, but production efficiencies.

It’s exciting too. This isn’t the last you’ve heard of Billy. 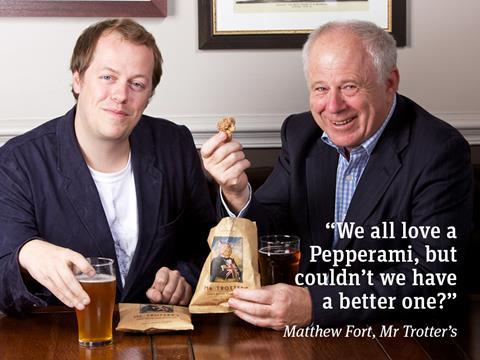 You’ll never find a stray bristle or a soggy scratching in a bag of Mr Trotter’s, the brand brought to life by old Etonian and food writer Matthew Fort and Tom Parker Bowles, the Duchess of Cambridge’s son, in 2011. These pork products are as posh as the people behind them. And they’re booming: turnover is on course to pass the £1m mark for the first time next year.

“It’s been a steady build up through independent distribution channels, farm shops, garden centres, delis, that sort of thing,” says Fort, adding that Booths and BP forecourts are now the brand’s biggest customers. Now the big supermarkets are in their sights.“We deliberately didn’t go along the supermarket route because it can leave you vulnerable. There’s a danger with the supermarkets that you can be delisted overnight and just crash and burn. But now people, and therefore the supermarkets, are more insistent on quality and provenance.” 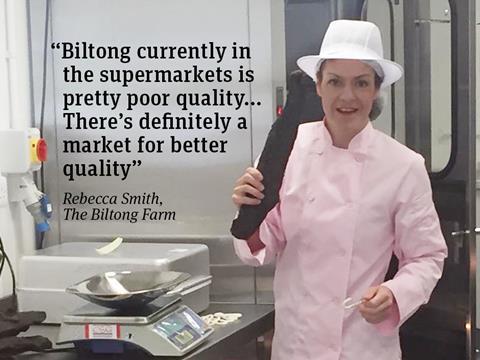 This is one of the newest players on the gourmet biltong block, but it has big plans. The Biltong Farm has already signed a deal to produce a Bully (remember the darts playing bull from 80s quiz show Bullseye?) biltong brand, which it plans to distribute to pubs and bars as a healthier, lower fat alternative to crisps. Further licensing agreements are on the cards.

“Growth is being driven by the latest health advice: that a high protein diet has major benefits for weight loss and metabolic health, that protein can reduce appetite and hunger levels, increase muscle mass, is good for your bones, can boost your metabolism and increase fat burning, lower your blood pressure, keep you fit as you get older, and help your body repair itself after injury,” says Rebecca Smith, who co-founded the business earlier in the year. “And it tastes great. We’re struggling to think of something not to like!”

This article is part of 2016 Meat, Fish & Poultry digital feature

Anyone would think Matthew Fort and Tom Parker Bowles went into meat snacks to meet women.

“It’s remarkable: if I do a promotion in store, about 60% of those who come and taste are women, and 80% of them are young and attractive,” says Fort, who set up posh pork scratching brand Mr Trotter’s with Parker Bowles back in 2011. It’s a crucial point, not about pork’s extraordinary pulling power, but Fort’s business. “We’re moving scratchings on from being a male, grubby pub snack.”

They’re not the only ones. Meat snacks are booming. Brits got through an extra 700,000kg (8.5%) of supermarket-bought cured sausage, beef jerky, biltong and scratchings in 2015 [IRI]. Now, says a growing band of purveyors of premium meat snacks (see left), Brits are developing a penchant for the good stuff. That means grass-fed cattle, pampered pigs and, inevitably, pricier packs.

“It’s all about making a crafted, quality product – this is handmade from scratch and I only use British grass-fed beef. Billy Franks will sell for a higher price than the stuff you get in the supermarkets.”

“It’s all about making a crafted, quality product – this is handmade from scratch and I only use British grass-fed beef,” says Will Yates, who set up Billy Franks Gourmet Jerky in 2014. “It will sell for a higher price than the stuff you get in the supermarkets. Most claim to have protein content of about 39% but there’s still a lot of sugar and stuff in there. The highest protein content of mine is 66.9%.”

In this age of paleo dieters and health-obsessed MAMILs (middle aged men in lycra), it’s the protein in products such as jerky that has power. Just ask the giants. “Eighty six per cent of people think protein is a positive step towards a healthier diet,” Sue McVie, strategic marketing director at Mattessons owner Kerry Foods told The Grocer in December. “Healthier snacks are on the up.”

“This is part of the macro market development and goes hand in hand with this growing expectation for quality. We all feel there’s a lot of dialogue to be had with the retailers.”

With the market developing and more players moving in, prices are coming down. The average price per kilo of meat snacks in the major grocers tumbled nearly 5% in 2015 as brands were forced to fight harder for a cut of the market [IRI]. But as the market matures, the likes of Trotter’s and Franks say the time is ripe for a new, premium tier in the category.

As does Rebecca Smith, who set up Licolnshire gourmet meat snacks supplier The Biltong Farm earlier this year. “The biltong currently in the market place, especially in the supermarkets, is pretty poor quality,” she says. “This takes away from the better, wetter version of biltong with a higher water content and much better texture. There’s definitely a market for better quality biltong.”

“The biltong currently in the market place, especially in the supermarkets, is pretty poor quality. This takes away from the better, wetter version of biltong with a higher water content and much better texture. There’s definitely a market for better quality biltong.”

So it’s time for the gourmets to move into the mainstream. “We all love a Peperami, but couldn’t we have a better one?” says Fort, pointing to the Sausilami cured snacking sausages Mr Trotter’s launched in May. “This is part of the macro market development and goes hand in hand with this growing expectation for quality. We all feel there’s a lot of dialogue to be had with the retailers.”

And, presumably, attractive young women too.

Previous article - What’s in the next wave of MSC certification?

Next article - Video: From fish to fillet… in just a minute!