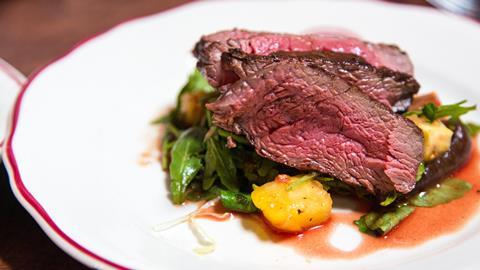 British meat producers must unite to make it big in Japan

Last week, I flew to Tokyo with representatives from AHDB, QMS and HCC, along with a delegation of UK meat processors. They were on a joint mission to promote UK beef and lamb and learn more about the Japanese marketplace, following the country’s decision to lift its long-standing ban on UK exports.

The first stop – ahead of Foodex the following day – was a reception at the British embassy in Tokyo, organised by the Department for International Trade and hosted by the British ambassador to Japan.

The event, which was extremely well attended by key Japanese businesses and journalists, was an opportunity for AHDB, QMS and HCC to give a presentation on the benefits of grass-fed beef and lamb from England, Scotland and Wales. It was followed by networking over drinks and a variety of British beef and lamb dishes cooked up by chef Chris Wheeler.

Chef Chris Wheeler of @StokePark cooking up some lamb at #Foodex in Japan. Lots of interest from the crowd @HybuCigCymru@TheAHDB@qmscotlandpic.twitter.com/L15po0GSrK

It was a historic evening in more ways than one. Not only did it mark the first shipment of UK beef to Japan for 23 years, and the first-ever shipment of UK lamb to the country, but it was the first time AHDB, QMS and HCC had come together for a joint event like this.

Judging by the conversations going around the room, and the vigour with which the Japanese attendees tucked into the British beef and lamb on offer, it was a resounding success. Indeed, several of the UK processors were asked to quote prices – not bad for their first tentative steps into a marketplace that is notoriously difficult to crack.

What quickly became abundantly clear, though – both at the reception and at Foodex the next day – is that Japanese consumers are not going to be interested in the differences between English, Scottish and Welsh meat.

In Japan, where consumers are obsessed with the union flag and the royal family, the brand is going to have to be British.

That will undoubtedly make some feel uncomfortable. Indeed, one of the angrier responses to my tweets during the reception was: ‘There’s no British meat. There’s English Scottish Welsh and Irish products differentiated according to niche. Marketing that’s now being ruined by this crass flag waving.’

But while English, Scottish and Welsh meat have distinct and important identities that should be maintained in the UK, and in Europe, cracking export markets like Japan is going to take a more united approach.

Ready for the British beef and lamb launch at the British Embassy in Tokyo with @AHDB_BeefLamb for @TheGrocer pic.twitter.com/X2C9bCX6GF

Leveraging the power of the union flag in Japan will be vital if grass-fed British beef is to compete with exports from the US and Australia, whose grain-fed credentials actually give them an advantage in a market where consumers hold up grain-fed wagyu beef as the best of the best.

There are other challenges, too. Not least the fact that unless the UK strikes a Brexit deal with the EU, we’ll revert to WTO trading terms with Japan on 29 March 2019 until our governments reach a bilateral trade deal. Which means our exporters could face much higher tariffs on beef than those from the EU, including Ireland, who will still benefit from reduced rates under the Japan-EU EPA.

Taking on these challenges and convincing Japanese consumers that grass-fed British beef is worth the premium is going to take the sort of joint effort that AHDB, QMS and HCC made in Tokyo last week. As Brexit approaches, and exports to third countries become ever more important, I hope processors and farmers from across England, Scotland and Wales can put aside their differences and see that sometimes, we really are stronger together.