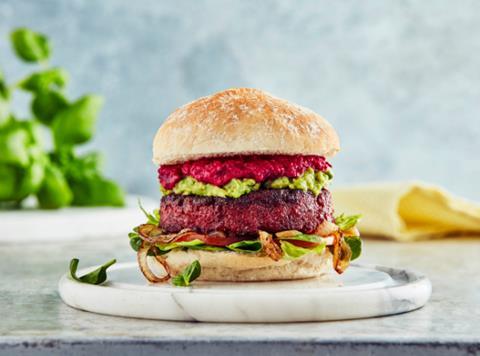 Iceland is to take a bite out of the burgeoning plant-based burger market with what it is describing as the first “meat-replicating vegan burger” to hit UK supermarket shelves.

With sales of meat alternatives booming, Iceland will launch the frozen No Bull Burger on 9 April in packs of two (rsp: £2).

The burger drew inspiration from ‘meat lookalike’ burgers making waves in the US for their “unmistakably meaty consistency”, Iceland said.

It is made using a soya bean base to produce a meaty taste and texture, as well as beetroot powder for a realistic colour.

“As flexitarianism rises and shoppers begin to take more interest in the contents of their baskets, more of us are turning to meat-free meals,” the retailer said. “But as food innovation develops we needn’t miss our favourite dishes as vegan substitutes are now as good as the real thing.”

“We pride ourselves on food innovation and always love a challenge in the kitchen,” said Iceland head chef Neil Nugent. “After seeing the popularity of these vegan burgers in America, we were inspired to create the No Bull burger, which is perfect for UK freezers,” he added.

“We’ve tested different textures and recipes in order to create the perfect no-meat meaty burger. You’d really struggle to tell the difference, it grills just like a regular burger so is brilliant for BBQ season this summer.”