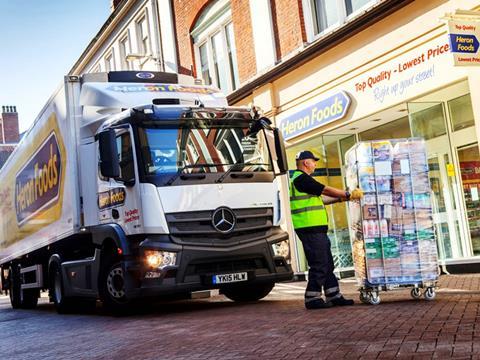 Heron foods, a potential ‘dsiruptor’ in  convenience food industry - if B&M Bargains gets its way

B&M Bargains is the latest retailer to get involved with the fevered consolidation of the convenience food industry with its surprise £152m swoop on Northern discount chain Heron Foods. The move comes as Tesco plans a £3.7bn merger with Premier, Londis and Budgens owner Booker, the rumoured Sainsbury’s bid for Nisa and the landmark supply chain agreement between Morrisons and McColl’s. So what’s the skinny?

Founded by the Heuck family in 1978 in Hull as Grindells Butchers, the business has quietly expanded, picking up empty stores as the likes of Dawn Till Dusk and Woolworths went under, and acquiring more than 50 sites, a depot and HQ from Iceland’s Cooltrader frozen food business in 2012. Today, it has 251 shops, which are on average almost 10 times smaller than a B&M Bargains store. At just 2,500 sq ft, they are mostly located in high streets and local neighbourhoods across the north and Midlands. Heron has evolved from a predominantly frozen specialist, with 1,200 SKUs and 50% of sales from ambient and 25% from chilled. It also owns and operates a 262,000 sq ft distribution centre and a multi-temperature transport fleet.

B&M CEO Simon Arora has spotted an opportunity to act as a disruptor in an industry undergoing mass upheaval. He says Heron, which he calls a “limited assortment discount-venience chain”, sits in the “sweet spot” between c-stores such as Nisa, Co-op, Tesco Express and discounters Aldi, Lidl and Farmfoods.

He notes in an analyst call that convenience has been an avenue of growth for the major supermarkets as sales stalled in their big-box stores, where the price wars continue to rage. However, he believes Heron offers something the supermarkets don’t. “The c-store channel is not differentiated by price,” says Arora, who has grown B&M from 40 shops in Lancashire to a nationwide concern with 540 sites in just 10 years. “I would categorise it as being an area where the major players seek to obtain premium pricing, and that is where there is room for a discounter. Heron often trades in areas where there are two to three competitors of the existing larger players and yet it still finds its share of wallets based on its compelling price proposition.”

He is confident B&M and Heron can put the same squeeze on the c-store estates of Tesco and Sainsbury’s as Aldi and Lidl have at the bigger shops. The deal also takes B&M into uncharted territory by adding frozen and chilled foods, with ambient food only generating a small proportion of sales compared with the general merchandise dominating its stores.

Where do the growth opportunities lie for B&M?

B&M already has ambitions to grow its portfolio to 950 stores in the UK over the next few years, but this deal isn’t a property play as Heron will remain independent, with fascia and branding remaining the same and two members of the Heuck family running the business. Arora says Heron is ready to roll out of its northern and Midlands heartland, with a target of 10-20 new stores annually. The B&M boss says the group has the financial firepower and experience to accelerate those numbers.

Heron is a different proposition to B&M, with smaller stores serving locals in the immediate catchment area with cheap, branded food. Peel Hunt analyst Jonathan Pritchard says Heron is “a quietly impressive business” that can fill a gap in the B&M armoury with its extensive frozen expertise. Arora also flags that B&M will trial selling its alcohol and other fmcg ranges in Heron stores, with opportunities to expand to further GM lines, which should fuel some healthy revenue synergies.

There should also be significant synergies from the improved buying power on ambient food, with the two businesses already sourcing their branded offerings from the same suppliers. HSBC European retail analyst Andrew Porteous says 1% of combined sales (£30m) should be a conservative initial estimate.

How did the City react?

Analysts fell over themselves to congratulate Arora on striking the deal in a management team call. Porteous says the “attractive, complementary acquisition” should bring strong growth and a strategic fit without a big bill. “We see strong strategic logic in the acquisition given the cultural fit of operating a discounter, the increased scale it brings and the complementary growth potential it offers,” he adds. “There should also be substantial synergies, as is often the case in food retail. “This is incremental to an already attractive core thesis with B&M’s low cost, value based offer is well placed to gain share and prosper in a tougher UK consumer environment. Longer term, a highly scalable operating model offers the potential for transformational expansion across Europe which could deliver earnings at a multiple of current levels” Pritchard highlights an EBITDA margin of 7% at Heron in 2016,- a very healthy position in a challenging market - which he thinks B&M may even be able to improve.

“There will be watchers that were expecting a European deal and may thus be disappointed that £150m has been routed to the UK,” he says. “[However] the deal will address a gap in the core B&M grocery range, and the numbers more than stack up anyway. And we don’t think that precludes a European deal at all: if the right set of assets come up in Germany, or any of the countries B&M has its eye on, then we think that the proximity to a domestic deal would make no difference at all”

Is B&M still a takeover target itself?

Last month media speculation suggested Asda was readying for a £4.4bn takeover of B&M. But the Walmart-owned supermarket poured cold water on the story, and said it was just analysing an emerging rival rather than targeting the business. And B&M could prove a tough acquisition as it is worth more than £3.7bn at today’s share price of 375.5p, compared with £2.7bn when it floated back in 2014. Pritchard says B&M shares are still “seriously undervalued”. “The business has its own growth prospects and management will be keen to plough their own furrow,” he adds. “Unless someone is willing to write a cheque for a very big premium that no one at B&M can refuse, it’s unlikely to happen - and odds against for being taken out by a retail peer. Simon will have an idea of the group’s value that is way ahead of the current share price and thus that big premium would be required to even get management to the negotiating table.”