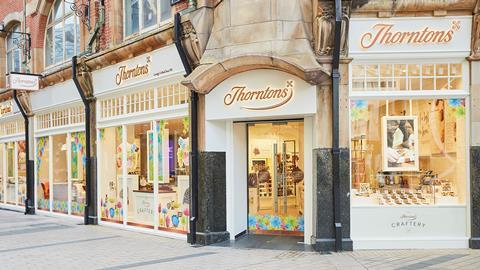 As Thorntons losses mount, can Ferrero turn the heritage chocolatier around?

Thorntons has racked up losses of close to £130m since the Ferrero takeover. What has Ferrero been up to? And how does Covid affect its plans?

The codename for Ferrero’s top-secret plan to buy Thorntons was ‘Project Cinderella’. But the Italian confectionery giant’s first-ever branded acquisition has been no fairytale.

It’s racked up losses of around £130m since the 2015 takeover, with sales dropping like a stone as the retail base continues to be trimmed. And that was before Covid kicked in.

So what’s gone wrong? And can Ferrero turn it round?

Established in 1911, Thorntons was in poor shape long before Ferrero acquired it. Its time as a listed company will be remembered for a string of profit warnings as it struggled to adapt the dilapidated and sprawling estate of almost 400 stores to the modern world. Ferrero understood when it acquired Thorntons that a long-term investment was required, with a strategic plan put in place to secure a sustainable future for the business, a spokeswoman for the group says.

And Alessandro Nervegna, UK & Ireland MD, says Ferrero is “proud” of the work it’s done at Thorntons. “The latest results simply reflect continuing and significant financial investment in the strategic reshaping of different areas of the Thorntons business.”

Those accounts, for 2019, recently published at Companies House, show a further loss of £35m as sales fell to £122m.

But a City source says: “It is meaningless to look at the P&L. It is just a subsidiary company within the giant that is Ferrero. They can load in whatever cost they need each year to get the business where it is going – and there will be other financial considerations at play such as tax arrangements.”

Once you scratch beneath the surface, he adds, a lot has changed, especially in the way the product is produced and the quality of the chocolate.

The factory in Alfreton, Derbyshire, has an annual capacity to produce chocolate worth about £240m in gross sales value, but this comes with a huge fixed cost base, which weighed on the business like an anchor (see annual operating costs in box).

The solution under ex-CEO Jonathan Hart when he was appointed in late 2010, had been to pump out higher volumes of boxed chocolates to supermarkets, convenience stores and petrol forecourts. But it was a disaster.

“Entering the fmcg market meant they had to promote the hell out of it [the product],” a chocolate industry source says. “But it was seen as a way to keep the lights on.” Unfortunately, the strategy had the unwanted side effect of eroding the brand value built up over a hundred years.

“They should be running Ferrero product through the factory like gangbusters”

Instead Ferrero’s plan, part of a £40m investment since it took over the business, is to make the Alfreton site a ‘centre of excellence’, and a key hub for the Ferrero group, as well as producing more Ferrero products for the international market.

“This investment will give the site new opportunities for growth and profitability,” a Ferrero spokeswoman says. “To achieve this aspiration, and ensure the commercial viability of Alfreton, we are ensuring we have the right machinery and infrastructure in place as well.”

But a chocolate industry source believes “there hasn’t been enough urgency to get non-Thorntons products running through the facility as more retail stores close and volume continues to fall.”

At least Ferrero is starting to export Thorntons overseas again. International sales at Thorntons fell to £1m in 2018 but at £8.5m in 2019 are back to pre-Ferrero levels.

But the pace is “so slow”, says the source. “Ferrero have sales teams in 100 countries. Exporting should be a no-brainer,” the chocolate industry source argues. “They should be running Ferrero product through the factory like gangbusters or putting the Thorntons Continental brand all over the world. Why isn’t it bigger? They should have a £500m export business by now.”

Ferrero’s other big challenge has been the Thorntons shops – where it had no experience.

The Ferrero group had always shunned acquisitions, relying on the ingenuity of founder Pietro and then son Michele, with the invention of global powerhouse brands such as Nutella and Ferrero Rocher.

When Michele died in 2015, third generation Giovanni hit the acquisition trail, starting with Thorntons, which he saw as a brand to compete with Cadbury in terms of heritage and consumer awareness.

But the problem of what to do with the stores has never been fully resolved.

Simon Wright, who helped launch Fairtrade brand Green & Black’s, expected big changes when Thorntons went private. “In the US, Ferrero have Nutella cafés,” he adds. “I thought Thorntons would convert stores to those cafés and the deal would act as a bridgehead to the UK market, but they have not followed that road.”

Another chocolate industry source believes Ferrero “are awesome at making good quality products, very, very efficiently. But Thorntons is a confectioner; you need a breadth of range not just chocolate boxes. Ferrero didn’t understand the brand or why people fell in love with it. It is not just a high-volume fmcg game. Variety is key to specialist retail and destination shopping.”

In June Thorntons retail director Sarah Ingram retired, to be replaced by Adam Goddard, who has been “instrumental”, says Ferrero, in shaping its US retail strategy. But the majority of his experience is in fmcg, including eight years for Ferrero UK working with the major supermarkets.

Ferrero has also been slow to prune the store portfolio, though 23 sites will not reopen following the closures during lockdown, and the majority are now franchisee-owned.

The biggest retail change has been the conversion of seven stores in destinations such as Liverpool One, Birmingham Bullring and Belfast Victoria Square to a new premium café format – echoing the Hotel Chocolat approach.

The new outlets have a ‘craftery’ where customers can create personalised chocolate boxes from the range, gift wrapping services, a chocolate block flavour library and a café offering afternoon tea with chocolate fondue, cakes and hot chocolate.

The newest convert, opened in Belfast in March, saw an immediate 244% sales uplift – before the pandemic forced the business to shut all its stores.

With the shops (bar those 23) now reopened, Ferrero says this approach would continue to be its focus and the next conversion will launch before Christmas.

“Opening a few fancy stores in places like Belfast pre-lockdown isn’t going to make much difference,” retail analyst Nick Bubb notes. “The accounts for 2019 are way out of date; the 2020 results will be even worse, given the collapse in high street footfall.

“The only thing that has saved Hotel Chocolat recently is the strength of its online operation, and Thorntons clearly isn’t as good at e-commerce.”

Nevertheless, the crisis provided a significant boost to Ferrero’s direct-to-consumer ambitions for Thorntons, with more than four million customers visiting the website this year, resulting in a 71% uplift in online sales.

As to the fmcg side, while the Thorntons brand disappeared from The Grocer’s Britain’s Biggest Brands survey in 2020, it was growing ahead of the market before lockdown, with total value up 6%, according to the Ferrero spokeswoman. In particular the Classic range has also been remastered, with new recipes and packaging, and registered growth of 16% over the past year, she adds, and was the fastest-growing chocolate brand in the top 15 over the crucial Christmas, Valentine’s and Mother’s Day periods.

Yet the competition is only getting stronger. As well as Mondelez, Mars and Nestlé, on the mass market side, “it has now been outflanked on the premium side” says Wright. “Look at Lindt and Green & Black’s, as well as up-and-coming brands such as Doisy & Dam and Tony’s Chocolonely. Cadbury and Galaxy have even launched dark milk bars.

“At one time in the UK, if you wanted a nicer bar of chocolate than Bournville, there wasn’t anywhere to go but Thorntons. Hotel Chocolat has stolen their lunch since then. And all the supermarkets are now doing very well in own label with single origin, high-cocoa content.

What’s more, it has been slow to react to changes and failed to embrace big trends such as dark milk and vegan, leaving rivals to occupy those grounds.

“It is not accurate to call Thorntons premium; it is mid-market at best – and very, very sweet.”

Yet despite the challenges, and the seemingly sluggish progress, only a fool would bet against Ferrero. It has a long-term strategy and, crucially, the cash to make Thorntons a success again.

“They have been slow to execute, but Ferrero will get there eventually with Thorntons, and they will never sell,” the chocolate industry source says. “The key lies in unlocking the volume in the factory. And if they can afford to pay dividends like that then Thorntons is probably very far down the agenda.”

Ferrero itself remains optimistic about Thorntons.

“Thorntons isn’t the scale of business that will change overnight, but it will come back into profitability if we continue with the strategy we originally set out,” the spokeswoman says.