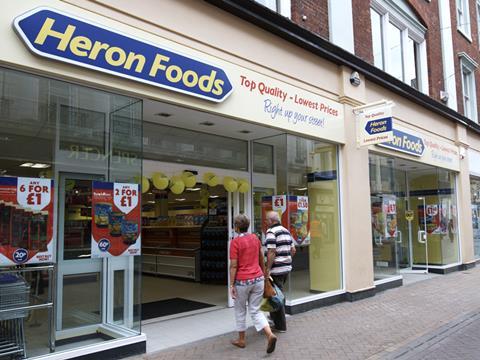 Heron Foods predominantly operates in the North of England, with 251 stores selling ambient, frozen and chilled lines. B&M said its initial plans to expand and develop the Heron business include opening between 10 and 20 new stores per annum.

Co-owner and manager Michael Heuck will retire from the business following the deal, Andrew and David Heuck will remain in their existing trading and finance roles.

David and Andrew Heuck added: “Both companies share a vision to bring great value to customers and the combination of Heron’s skills with the expertise and resources of B&M will mean the creation of a potent new force in the structurally growing convenience sector. Today’s transaction secures for Heron’s loyal and hardworking workforce a perfect long term home within the B&M Group and provides an exciting platform for the roll-out of more Heron stores nationally.”

The total enterprise value of the takeover is £152m, including debt, with an initial cash consideration of £112.1m paid by B&M on exchange and completion of the acquisition today. Up to another £12.8m will be paid based on the EBITDA performance of Heron up to 31 March 2019.

Liberum analyst Wayne Brown said: “This deal gives B&M another growth channel which is in a structurally favourable segment of the market and we can see why this would be appealing to the group.

“There is much consolidation in this segment of the market, with Tesco potentially acquiring Booker, McColls having signed a new supply agreement with Morrisons, and Sainsbury rumoured to wanting to buy Nisa.

“B&M state that much of the growth in this market has been achieved at premium pricing and it sees an opportunity here.”

He added: “Questions to ponder; will this deal raise concerns that B&M’s growth is more limited in its core business, could this deal prove to be a distraction and will it be incorporated in the B&M supply chain though it likely has a very different product offering.”