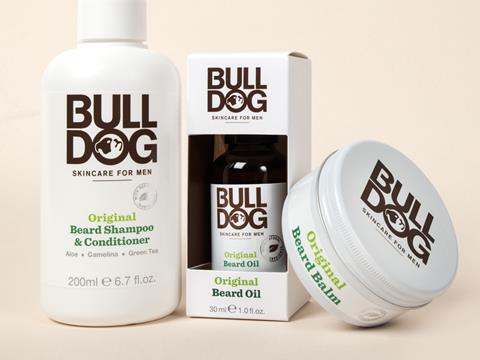 Bulldog for Men is eyeing major global expansion following its acquisition by Edgewell Personal Care, the US-listed fmcg supplier that counts Wilkinson Sword, Playtex and Hawaiian Tropic among its brands.

The British male grooming brand - which began exporting in 2010 - is already in 14 countries including Germany, Portugal and South Korea. The deal with Edgewell would provide access to 50 overseas markets, said Bulldog founder Simon Duffy.

As well as gaining inroads to Japan and several European countries for the first time, the brand also now had “significant bandwidth” to expand across the US “with gumption”.

Bulldog’s sale to Edgewell was a “really, really good fit” for the brand, Duffy said. “It was a real wrench, but it was the right thing to do at the right time.”

Edgewell had previously expressed interest in the UK brand, which early this year found itself frustrated by “lack of capacity” to take up growth opportunities. It approached the US supplier after being encouraged by shareholders to find a strategic partner.

Edgewell’s ownership wouldn’t change Bulldog’s operations, Duffy added. “It will be a standalone unit within the group, with the same business and people.” The brand will stay based at Ladbroke Grove while continuing to manufacture in Somerset.

Duffy expected turnover to be just over £10m at the end of its next financial year and said it was “fundamental that we don’t throw the brand off track” as it grew by around 40% per annum.

Bulldog was “an exciting and fast growing brand” and “a natural fit” for Edgewell, said the company’s vice president of commercial international, Colin Hutchison. “This acquisition creates opportunities to expand our personal care portfolio in a growing global category where we can leverage our large geographic footprint.”