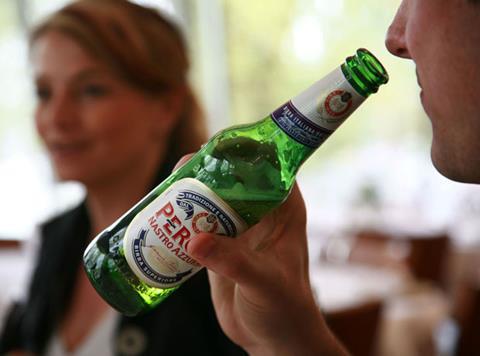 SABMiller’s brands include Peroni and Grolsch

Global mega-deals are oft rumoured, but rarely get to the finish line.

The long-rumoured pursuit of London-listed SABMiller by the world’s largest brewer AB InBev, first mooted as long as four years ago, has so far shown little sign of being consummated.

The events of this weekend, however, suggest the next wave of beer industry consolidation could finally be upon us.

Heineken’s admission yesterday that it rebuffed an advance from SABMiller is the clearest sign yet that the South African brewer expects an approach from its bigger rival and is looking for ways to protect itself from being swallowed up.

Heineken looks to be off the table, but an AB InBev acquisition of SABMiller is far from certain as a host of other scenarios could yet play out.

Analysts at Canaccord Genuity Group feel an AB InBev bid for SABMiller had never looked more likely, writing. “That SABMiller’s inorganic options have been so publicly lessened puts AB InBev in an even stronger position… SABMiller shareholders may be even more likely now to welcome a bid.”

The Wall Street Journal has reported that AB InBev had opened talks with banks about financing a deal – likely to be in the region of £75bn.

There appears to be two key, although not insurmountable, stumbling blocks to such a deal.

Firstly, with SABMiller’s board apparently resistant to being taken out, any deal won’t come cheap. The £75bn figure represents around a 30% premium on SABMiller’s current share price (which has already risen by over 20% year-to-date) and implies a full-year 2014 P/E ratio of 29 times. Investec analysts to concluded “The numbers are not obviously compelling from the acquirer’s perspective…  It is a formidable challenge to make the numbers work.”

The numbers are not the only formidable challenge, given the regulatory push-back to merging the world’s two largest brewers. It would be inevitable that any combined entity would be forced to sell SABMiller’s 58% stake in MillerCoors in the US and would be likely to have to get rid of brands in China and India too.

However, if AB InBev believed the long-term scale benefits outweighed the hefty cost, the deal looks do-able as there is surprisingly little genuine overlap between the businesses.

In some senses SABMiller is shaping up to be a victim of its own success. Unlike some of its contemporaries, SABMiller has made huge strides in fast-growing markets across Africa makes it a close-to-perfect fit for a North American-centric business looking for growth.

With regulators unlikely to block a deal, SABMiller’s interest in Heineken looks like an acknowledgement that it may be up to the board itself to take the company out of play. If this is there strategy, SABMiller still could have some cards to play.

Heineken, given its firm rejection of SAB’s approach, and Carlsberg look unlikely, but Barclays sees a Diageo/SABMiller tie-up as a “credible alternative” – either as a merger or SAB acquiring Diageo’s beer interests, which include Guinness and Kilkenny.

SAB could look to buy the remaining 42% of MolsonCoors to scale up in North America – although it cannot make an unsolicited approach until 2017. African brewer Castel, which owns 38% of SAB’s African operations, is another option that would boost scale and make an AB InBev approach prohibitively expensive.

A final option mooted by Investec is the acquisition of Coco-Cola bottlers (such as Coca-Cola HBC), given SAB’s existing bottling arrangement with Coca-Cola in Africa – although Investec concedes this would be “unlikely to delay an approach by ABI for long”.

Regardless of the path it chooses to take, the brewer’s South African roots are likely to mean that the board cannot rely on a UK political and media campaign to help defend itself from the clutches of a foreign rival in the way AstraZenica was able to see off Pfizer’s approach back in May.

Whatever the options at SABMiller and AB InBev’s disposal – the maintenance of the global brewing status quo is perhaps now the least likely scenario of all.