Intersnack picks up Popchips as market for snacks hots up 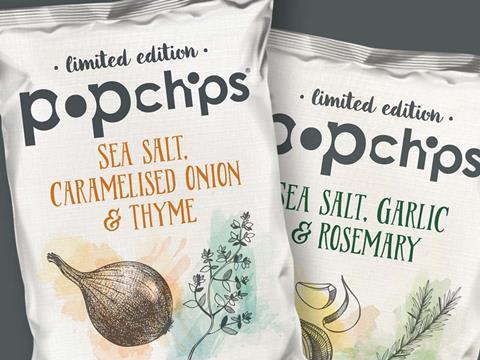 The flurry of dealmaking in the UK bagged snacks sector has continued unabated with Intersnack snapping up Popchips in Europe and other crisp makers subject to bid interest.

Intersnack announced this week it has acquired Popchips’ European brand via its UK subsidiary KP Snacks for an undisclosed sum.

Popchips launched in the UK in 2012, five years after it was created by Keith Belling and Patrick Turpin in the US. Parent Popchips Inc will continue to run the brand in North America and other international markets.

The deal comes just two months after Intersnack purchased Tyrrells from Hershey and a year since it bought Butterkist from Tangerine Confectionery.

The Grocer understands another bagged snacks brand exploring sale options is Manomasa and Mexican Dave’s owner It’s All Good. The Durham-based group, which was subject to a £3.5m minority investment by NVM Private Equity in early 2014, is understood to have been working with corporate advisors Houlihan Lokey to explore options including a possible sale.

IAG’s brands, which target the premium end of the market, are listed in Waitrose, Ocado, Sainsbury’s and Asda and the group has built a significant own label tortilla chip range, including at M&S.

One dealmaker noted its status as one of the few competitors to PepsiCo’s Doritos gave it a compelling market position. “The range is really on-trend, focused on more exotic, fashionable and healthier products and there are not many other branded tortilla snacking brands out there.”

It is understood a sale is one of a number of strategic options being investigated, including refinancing, raising external capital or pursuing acquisitions. The group will soon post annual accounts for 2017, but in the 2016 calendar year it grew sales by 48% to £18m and make a pre-tax profit of £1.1m.

Co-founders Calum Ryder, Michael Weatherhead and Lynn Saul set up IAG in 2012, having previously worked at Intersnack. Ryder formerly led pretzel manufacturer Union Snack, which was backed by NVM in 1996 and sold to Intersnack in 2007.

One snacks player eager for UK expansion is Japanese snacks group Calbee, which is believed to have missed out on Butterkist and Tyrrells, both to Intersnack, but has been linked with a deal to buy Pipers Crisps, according to market sources.

Pipers hired Spayne Lindsay in 2017 to review its options. City sources suggested Calbee could be interested in Pipers as a route into foodservice .

A Spayne Lindsay source said no sales process for Pipers was underway.