Kraft Heinz in pole position to take back Philadelphia 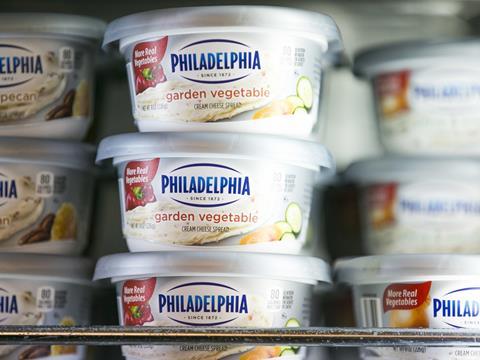 Kraft Heinz is in pole position to take back full control of Philadelphia as Mondelez readies a $3bn (£2.1bn) sale of its grocery and cheese division.

As reported by The Grocer in the wake of the mega-merger of Heinz and Kraft Foods in March last year, the enlarged group has first refusal thanks to its spin-off from Mondelez in 2012.

The Cadbury owner holds European rights to the cream cheese brand, while Kraft owns the licence in North America.

Mondelez did not comment on the rumoured sell-off during a presentation at the Consumer Analyst Group of New York conference earlier this week, but said the cheese and grocery business, which has annual sales of about $3bn and includes Dairylea in the UK, had been “performing well, with margins in line with the group”.

“In time, we expect Kraft Heinz to buy these [assets] back and Mondelez to acquire more in snacks,” analysts at investment bank Canaccord said.

Rumours Mondelez hired investment banks JP Morgan and Goldman Sachs to sell the division surfaced in October as the group separated it into a standalone unit after splitting off its coffee interests into a jv with DE Master Blenders 1753.

Other big dairy players Kerry and Lactalis have also been linked to the deal by City sources but one senior dealmaker said the problem with the disposal was one of scale. “It will be out of reach for most players on the trade side, so the buyer universe is pretty small on the trade side. If Mondelez passes, the big funds, such as KKR, Permira, Blackstone, Carlyle, will have a look.”

Growth has slowed in the past three years at Mondelez, with volumes declining for the past eight quarters. Earlier this month, the group posted a 13.5% drop in revenues for 2015 to $29.6bn as currency movements, divestments and cost savings hit reported sales.

The cheese and grocery assets, including Philadelphia and a range of European cheese brands, are expected to go up for sale next month, according to The Sunday Times.

A Mondelez spokesperson said: “As a matter of practice, we don’t comment on market rumours. Cheese and grocery is a good business, with solid margins and cashflow, which helps to provide scale in some markets. The team is executing well, having posted solid growth for 2015.”