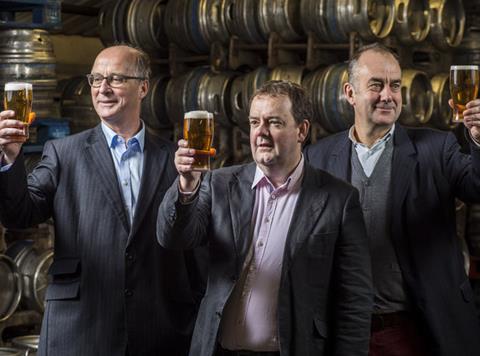 John Hunt, finance and strategy: more than 20 years in the drinks industry, most recently with Heineken in Amsterdam as executive director for global strategy. Prior to this, he was MD of Heineken’s development markets in Western Europe.

Scottish craft brewer Broughton Ales has been acquired by a trio of drinks industry veterans.

The business, which is based near Biggar in the Scottish Borders, has been bought by John Hunt, Steve McCarney and David McGowan, who have more than 50 years’ trade experience between them in senior roles at drinks groups including Scottish & Newcastle, Heineken and Diageo.

Broughton Brewery produces brands including Greenmantle Ale, Old Jock, Hopopotamus IPA and Blonde Lager, which are stocked by retailers including Waitrose, Sainsbury’s and Tesco. The business - which employs six staff in brewing, distribution, sales and administration roles - was founded in 1979 by David Younger of the Younger brewing family and James Collins.

The new owners said they would invest in developing the business, build on its reputation for quality, and reinforce its Borders roots. They plan to work with tourist and trade bodies to help promote Scotland as a producer of innovative, high-quality beers.

“Broughton has a unique position in Scotland’s beer story, built around fantastic product quality,” said McGowan. “On our first visit, we were struck by the numerous quality awards from a variety of organisations, including CAMRA, SIBA, regional festivals and supermarkets - literally there isn’t enough space on the walls to display them all.”