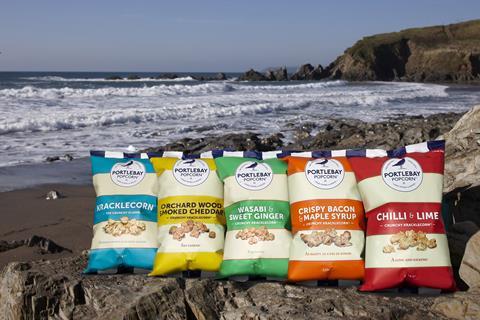 Irish crisps maker Tayto has rescued popcorn brand Portlebay from administration for an undisclosed sum, The Grocer can reveal.

The popcorn business, founded in 2012 by a former director of Burts Chips, suffered difficult trading and was placed into administration yesterday (31 January).

Tayto and two of the founding Portlebay shareholders, Jonty White and Neil Adams, acquired the trade and assets from administrators at insolvency specialist Lameys, saving all nine jobs at the manufacturer.

Portlebay Popcorn will continue be run independently from Tayto, which makes Golden Wonder crisps, but will benefit from the scale of the wider group.

Tayto CEO Paul Allen said: “This is great investment for us, popcorn is a growing market and Portlebay is a great, premium product.

“We are also delighted that all the staff, including founders Jonty White and Neil Adams, will be staying on and will continue to run the business. It is a fantastic opportunity for us to combine our many years of experience and some investment with their exuberance and innovation but, for now, we just want to provide some stability and security for both staff and customers.

“We are in the process of putting together a plan for how we are going to develop Portlebay and will be sharing that with the trade in the near future, so watch this space.”

Portlebay Popcorn is hand made at the business’s own facility in Devon named the Poppery. The deal gives Tayto, which already sells popcorn under its own brand, its first popcorn manufacturing site.

The brand is stocked by Tesco, Boots, Sainsbury’s and Budgen, as well as a number of independent retailers.

However, the business lost some of its listings with biggest customer Tesco in September 2016, with just the crispy bacon & maple syrup and lemon sherbet flavours still stocked by the supermarket, according to Brand View.

Tayto is the biggest crisps and snack manufacturer in Northern Ireland, producing five million bags a day across its five UK sites. The group remains family-owned and its headquarters are in Co Armagh, Northern Ireland. Its portfolio includes Mr Porky, Real Crisps, Jonathan Crisp and Tayto.