Tesco and Carrefour call in suppliers for Geneva crunch talks 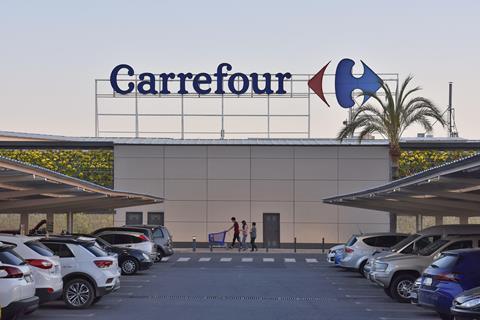 Tesco and Carrefour claim suppliers will benefit from improved joint sourcing agreements. But a source close to the negotiations said “suppliers are not very clear on what they will be receiving in return for any improvement in terms from Tesco-Carrefour”

Tesco and Carrefour have summoned suppliers for crunch talks in Geneva, prompting fears of a new squeeze, The Grocer can reveal.

The two supermarket chains, with combined sales of £120bn, set up a strategic alliance last summer to achieve cost savings through new umbrella agreements in the countries where they do not compete.

The talks - led by Carrefour - aim to “harmonise rebate terms” while also saving tax, as overrider payments are sent to Carrefour’s HQ in Geneva. About 30 major branded Tesco suppliers are involved in the discussions.

Tesco and Carrefour claim suppliers will benefit from improved joint sourcing agreements. But a source close to the negotiations said “suppliers are not very clear on what they will be receiving in return for any improvement in terms from Tesco-Carrefour”.

“There is also the sense of some vague disadvantage were suppliers not to agree to align rebates,” the source added.

Another supplier source said: “Do people have a choice with these global deals? It’s a good question.”

Concerns have also been raised that the alliance is circumnavigating GSCOP “threatening a loss of business in a different country, outside the scope of GSCOP,” said one supplier.

In the talks, suppliers have been assured that the alliance will be “in the spirit and to the letter of GSCOP”, with buyers from Carrefour stressing in meetings that they are drilled in the workings of the code, even though its protection only comes into play for sales destined for the UK market.

But suppliers believed “the terms of these umbrella deals may constitute a disadvantage to a supplier which amounts to a variation of the supply agreement affecting UK supply”.

“Any disadvantage may affect ranging decisions, whereby the alignment of terms might in effect be a listing fee. Were any disadvantage to a supplier to result, would that amount to duress under GSCOP, even if the impact of the duress is felt in a different market to the UK?”

Suppliers have also raised concerns over Carrefour’s prominent role in the talks.

“Carrefour have taken over the negotiation [of Tesco’s agreements with global suppliers], and will also possibly encourage the 100 they already have to organise some type of agreement that includes Tesco,” said one.

But whereas “Tesco’s approach has been very collaborative and positive, these negotiations are not like that”.

There are also concerns about the “reputational risk” associated with making these payments in Switzerland.

“By Carrefour managing these umbrella agreements they would like the payments to be made in Geneva. For our business in the UK that’s not really seen in a positive light. We would rather the money that is earnt in the UK is paid in the UK.”

The concerns come amid huge opposition from suppliers to the proposed merger between Sainsbury’s and Asda, whose bosses made no secret of their intention to target big suppliers for cost reductions.

While the Competition & Markets Authority appeared to throw cold water on the Sainsbury’s-Asda merger in its provisional findings report last month, it ruled out investigating the Tesco-Carrefour alliance last year, despite fears expressed by the House of Commons Environment, Food and Rural Affairs Committee over the impact on Tesco suppliers.

But France’s Autorité de la Concurrence is investigating whether it could threaten competition rules and this week told The Grocer the probe was “still ongoing”.

John Noble, director of the British Brands Group, said it was vital suppliers were protected by GSCOP from any change to trading conditions caused by the partnership.

“The group is a strong advocate of GSCOP and the effective role played by the GCA. GSCOP has had a marked and positive influence on trading relationships and can only continue to be effective if the GCA is aware of what is taking place in the market.

“The alliance between Tesco and Carrefour is relevant in so far as it involves a GSCOP-designated retailer, though we are not hearing of potential breaches, whether via our GSCOP training courses or other routes.”

A Tesco spokesman said: “By working together and making the most of our collective expertise and capability, our strategic alliance with Carrefour will allow us to serve our customers even better, further improving choice, quality and value. This agreement will also allow both companies to strengthen our relationships with suppliers and create significant opportunities for those suppliers.”