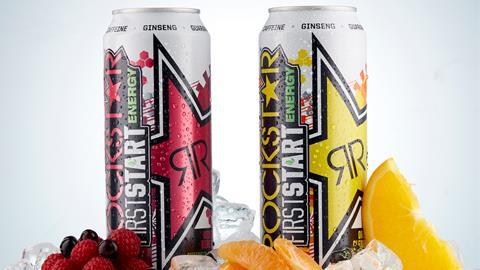 What does the future hold for Rockstar Energy under PepsiCo?

All rock stars sell out eventually. Even the drinkable kind: PepsiCo snapped up Rockstar Energy in a titanic $3.85bn (£3.19bn) deal last week.

It shouldn’t come as too much of a surprise; PepsiCo has distributed Rockstar in the US since 2009. Meanwhile, demand for energy drinks across the world - from uber-caffeinated sports fuel to ‘natural’ drinks tailor-made for the Whole Foods crowd - is surging. In the UK, category sales were up £99.8m (8.1%) last year, hitting £1,330.4m [Nielsen 52 w/e 7 September 2019].

So what does the deal mean for Rockstar’s prospects in the UK? And why is the energy category so vibrant right now?

It’s a serious play. And a shot across the bow of PepsiCo’s nemesis Coca-Cola. Coke has spent the past few years on a major drive to become a ‘total beverage company’, splurging millions on NPD and brand extensions in categories it previously didn’t play in, like coffee and energy, where it is currently going head to head with Red Bull with its 2019 launch Coke Energy.

“Coke is saying that what people drink and why people choose those drinks is changing, and that being the king of just one of those choices is not enough for the growth of the company,” says HRA Global MD Hamish Renton.

“This is PepsiCo executing the same strategy: offence and defence, looking to preserve share of throat.”

According to GlobalData drinks deputy editor Andy Morton, the deal “sounds the starting gun” for a new frontier in PepsiCo and Coca-Cola’s ­beverage war.

“For years, the global energy drinks market was dominated by the upstart Red Bull. Recently, however, Monster - buoyed by a sea of cash from domination in the US - has closed the gap by stretching its tentacles beyond the country, with exports boosted by a distribution agreement with Coca-Cola.”

Still, Rockstar has some serious ground to cover before it catches up with CCEP’s Monster in the UK. At the moment, Rockstar - distributed here by Irn-Bru owner AG Barr - doesn’t even rank among the UK’s top 100 biggest fmcg brands, while Monster pulled in value sales of £259m last year [Nielsen 52 w/e 31 December 2019].

But with PepsiCo’s financial heft it could “become a global player and expand beyond its current few-dozen export markets”, says Morton.

Key to the success will be ­synergies, says Renton, rather than access to extra cash. “That’s the magic of brands - you can squirt more volume into the existing overheads. There will be marketing, category and sales economies of scale.”

And that’s without mentioning what the deal means for NPD. “This will be very good news for the innovation pipeline on Rockstar,” says Renton. “PepsiCo will no doubt have ideas in the pipeline that they don’t think work on their existing brands.”

Energy is an incredibly versatile, far-reaching category, he says, spanning “from nootropics at one end to high-sugar, high-caffeine stuff.

“Unleashing PepsiCo’s NPD boffins on this property - that’s the thing to watch,” he adds.

So should Coke be scared? Not necessarily. Data suggests the energy category is no one-horse town. When Coke Energy launched, pundits wondered if it would be a Red Bull killer - but in reality both grew tremendously.

Which means, for this rock star at least, selling out could be just the beginning.