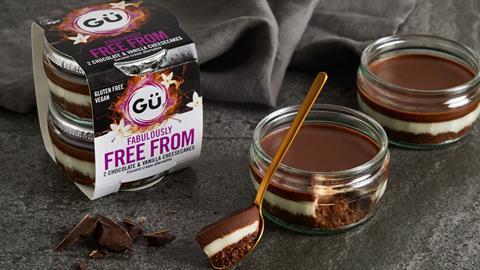 Why is Noble selling Gü and who is lining up to buy it?

Noble Foods has kicked off one of the hottest auctions of the new year, with some of the world’s biggest food producers expected to enter the fight for posh pudding brand Gü.

The egg producer has appointed Spayne Lindsay to find a buyer for the brand it bought a decade ago in a bidding process likely to top £100m.

It’s not the first time Noble has explored a sale of Gü, with Italian giant Ferrero thought to have been in serious discussions about two years ago and Nestlé also taking an interest.

So, why is a sale back on the table now, and who are the likely suitors this time round?

Dealmakers see the move as perfectly timed, given there is, according to one City source, a “huge premium for hyper-resilient businesses that are doing well this year”.

While the chilled desserts category is down 3% year on year, according to Nielsen data, premium desserts are up by 13%, with Gü driving around 90% of category growth. As a result UK retail sales value is now over £60m, up almost 20%.

“Gü offers a little bit of affordable indulgence at a time when consumers can’t spend money on holidays or at restaurants,” one dealmaker says. “It is at a premium price point and is also in both hot and cold, which serves it well through the year.”

Part of its resurgence is due to its diversification away from its core chocolate puds, with the launch of spreads and ice creams, as well as chilled desserts, including free-from, mousse and hot puddings.

Some innovation has been more successful than others, with ice creams falling flat but Gü Free-From becoming the number one UK brand in the space, it claims.

“We decided that a diversion into frozen detracted from what we need to focus on – premiumising every segment we decide to target,” says MD Pete Utting

The brand also moved to a “state of the art” factory in Bishop’s Stortford in 2018, investing a rumoured £30m.

Companies House accounts for Gü show annual turnover of £48m in the year to 27 September 2019, and the figure is expected to have grown to well in excess of £50m in the current year. That means sales will have at least doubled since Noble bought it in 2009.

It’s a similar situation with profits: pre-tax profits in 2019 were £1.6m (up from just £88k in 2018), and that’s thought to have improved further, pushing EBITDA to around £10m, and giving the business a valuation in excess of £100m based on a multiple of 10 times or more.

“Management has done a great job – now is the right time to sell,” says another City source.

Consequently, demand for the brand is expected to have intensified since Noble last considered a sale. Nestlé and Mars were interested in the brand back when Noble bought it, while Ferrero and General Mills are tipped as potential suitors.

One source points to European players who have bought dessert brands in recent times, such as Italy’s Emmi or Germany’s Dr Oetker, while also noting fellow desserts player Müller or US chocolatier Hershey as possible buyers.

Although a trade buyer is tipped as most likely, UK and international PE firms may also be keen on its growth profile.

Growth opportunities remain in the UK, where one observer notes retailers “love the brand” as it brings shoppers to the chilled desserts category and provides good margins.

Another source notes it has yet to fulfil international potential, having built sales in Germany, France, but failed to crack North America after an aborted push in the early 2010s.

Noble is likely to look for a deal in the first quarter of 2020, before widely tipped changes to capital gains tax increase the tax burden associated with the sale of growing assets.

Meanwhile, the growth story looks set to continue, with Noble understood to be exploring another manufacturing facility to meet demand.