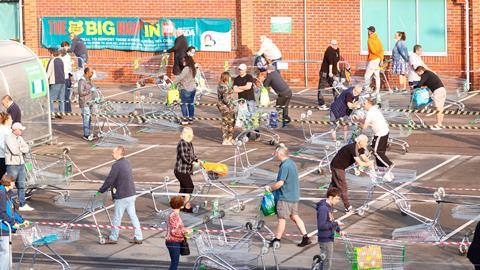 With negotiations back on after lockdown, what now for Walmart’s sale of Asda?

Walmart has restarted talks with a number of third-party investors

As lockdown restrictions lift in the UK and sectors begin to reopen, there are signs the dormant M&A industry is also returning to life, starting with the unpausing of Walmart’s sale of Asda.

The process was well advanced when it was forced to a halt in April as Walmart and Asda battened down the hatches to deal with the storm of panic buying and securing supply chains, while private equity firms also got their houses in order as debt markets seized up.

So, who could buy it now? How will Covid have affected valuations? And what next for Asda?

“We believe now is the right time to explore options for a third party to invest in our business to accelerate the long-term delivery of our value strategy, both in stores and online,” a Walmart spokesman says.

US investment giants Lone Star and Apollo, and UK firm TDR Capital which holds a minority stake in forecourt operator Euro Garages, are the three parties still in the running. Second round bids are expected in September, with a deal to be finalised in the new year.

The resilience of supermarkets during the pandemic may generate more interest in grocery assets as investors see the sector as a defensive safe haven with a severe recession looming. However, with the Asda process already heading for the finishing line, it would prove extremely difficult for anyone to catch up to the existing contenders, according to a senior City dealmaker.

“The reputation of supermarkets has improved through the pandemic, they really all have stood up and fed the nation”

That said, a fourth player – a consortium of unnamed high-net-worth individuals – was on the fringes of the process when it was paused in April and is currently in discussion with Walmart’s adviser Rothschild to be included in the second round, the City source adds.

It remains to be seen whether the bidders are willing to meet the $10bn (£7.6bn) asking price, but, as Clive Black of Shore Capital points out, PE firms are sitting on a mountain of cash that needs to be invested somewhere.

“The reputation of supermarkets has improved through the pandemic,” he says. “They really all have stood up and fed the nation.”

Another dealmaker adds: “The performance of the grocers during the crisis should firm up valuations in the sector and really demonstrates the downside protection offered by these assets. Grocery is the one sector you can be certain of at the moment, no other sector can really offer that.

“Plus, retailer cashflows are huge, so any investor can pay debt down from cashflow, pay themselves big dividends and not bother themselves too much about an exit.”

And with online shopping growing – an area where Asda performed strongly during the pandemic – and Asda holding the freehold on about 70% of its 600-strong store estate, Walmart will feel it has a good hand to play in negotiations.

The Grocer covered the attraction of Asda’s property portfolio to potential investors in-depth back in March, with some fearing PE would bleed the assets dry with a sale-and-leaseback programme.

However, Walmart will retain a significant minority stake in the supermarket in any deal and still has long-term ambitions to float Asda on the stock exchange, according to sources in the City.

HSBC retail analyst Andrew Porteous argues if an IPO is the end goal then it wouldn’t make sense for an investor to sell off the freeholds.

“You can take capital off the table by doing that,” he says, “but it hasn’t been a terribly successful strategy to asset strip these businesses and constrain the operating company.”

He adds: “Walmart has shown over the past few years they are not willing to invest meaningfully in the Asda business, concentrating on the US and online to take on Amazon over there. A few years ago, when Asda was having a torrid time, a needed price reset was delayed, and the business needed capital invested to refresh the stores.

“It might be Walmart are looking for partners who are willing to invest and share in the upside down the road.”

Walmart retaining a stake will also mean Asda can still access savings coming from the US group’s global buying power. And as international CEO Judith McKenna was keen to point out when she first floated the idea of an Asda IPO back in May 2019, following the collapse of the Sainsbury’s deal, the Walmart approach overseas is “a consistent focus on strong, local businesses powered by Walmart”.

The question remains, what strategy will a new investor in the business take when it comes to potential partnerships, moving more into convenience or looking at ranging?

“I don’t know if the future is about ultra-fast online deliveries and dark kitchens, as these are trials, but they are bound to explore lots of options, and more so when they are free from the restrictions of operating under Walmart,” a top retail source says.

“They will be looking to extend their franchises, look at shop within a shop and potentially stocking Iceland products,” he adds. “And franchises are an easier way for a brand like Asda to introduce premium offerings, as it’s struggled to attract those shoppers with its brand and its range in that department.”

As with UK grocery more generally, the spectre of Amazon hangs over the deal. With its move last week in the online grocery market, speculation is again mounting that Amazon will need to take out a significant retail player if it wants to make real inroads into the UK industry.

While it is unlikely to be involved with the current Asda sale process, a partial departure of Walmart potentially opens the door to a future investment.

“The benefit of a new private equity owner, of course, is it plays as an intermediary option in the event Amazon wants to buy it,” the retail source says. “Walmart was never going to let that happen, but a private equity owner doesn’t have that embarrassment.”