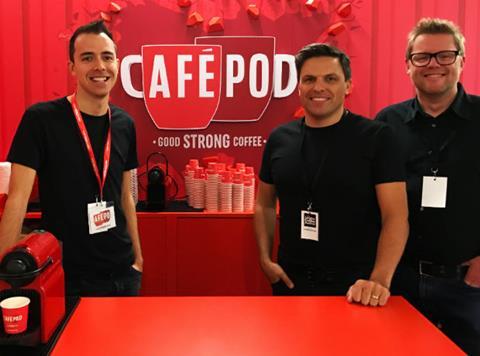 Clarke is the former sales controller at sports nutrition business For Goodness Shakes (FGS). He was recruited by his predecessor, Rowland Hill, who joined CaféPod in April 2016 as commercial director following the sale of FGS to the Irish dairy co-operative Aurivo for an estimated £25m.

“Lee and Rowland have done an amazing job quadrupling our distribution over the last 18 months, so when they recommended Ben’s appointment to the team to continue this momentum, it was an easy decision to make,” said CaféPod CEO Peter Grainger.

“I’m really excited by the team we now have in place to support the continued growth of both our existing and new business.”

In 2015, CaféPod completed a fundraising round of £1.35m and announced former Diageo European president Andrew Morgan was to join its board after making a major investment.

The company was incorporated six years ago by Grainger and Brent Hatfield (COO), and has been trading for just over four years.