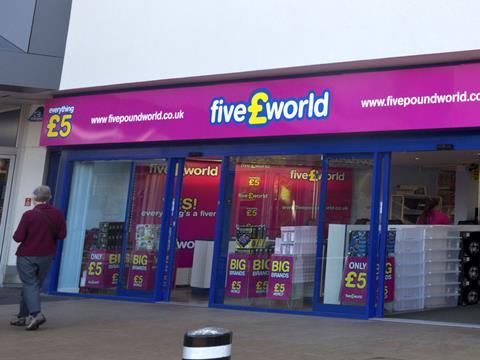 Two regional directors, the heads of HR and retail and the CEO have all left

Five Pound World’s senior management team have left the company, weeks after the first store opened with plans for 150 more.

Two regional directors, the heads of HR and retail and CEO David Cox are among those to have departed.

The exodus is understood to leave only store staff and the owning family at the new variety retailer, which sells everything for £5.

Three stores have opened so far, including the first one which began trading in Burton-on-Trent in October and two more in Derby and north London’s Walthamstow.

Among those to have left are regional director for the north Darron Hitchcock, formerly divisional operations manager at the defunct chain Poundworld, and Chris Yates, a former Poundworld store development manager who was Five Pound World’s director of retail development.

“The CEO went, followed by both regional directors, the head of HR and the head of retail development,” a source told The Grocer.

“There are no senior people left who were hired from the start. The only people who remain are the store teams in the three branches, the owner Dev and a few of his family.”

A senior figure at the company told The Grocer in October how the retailer planned to offer mix and match fmcg deals at the same single price point, giving the example of four bottles of Domestos spray bleach for £5.

“The pound is dead,” the employee said at the time. “Five pounds is the new pound.”