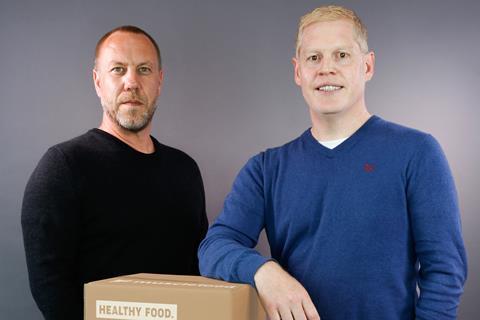 Musclefood has appointed joint CEOs to turn around the flagging high-protein food and snacks online retailer, and lead it through a new stage of growth.

Former commercial director Nick Preston, and Mark Wasley, previously CFO and COO at Sofology, have taken the helm at the company.

The pair have increased sales at the Nottingham-headquartered business, made senior appointments and started an expansion at the Manchester office since taking charge in September.

At the height of panic buying on the high street in March, the business, which sells meat, high-protein meals and snacks, delivered more than 135,000 orders, with website visits up to 2.3 million.

Customer volumes also increased 125% in April and May compared with the prior year, with repeat customers up 35%.

Preston was commercial director at the business for five years before taking up his new role.

Wasley has held management roles at the likes of Phones4U, Shop Direct Group and Sofology for the past 15 years.

Preston said the pair’s appointment came after sales declined at the company for the first time since its formation in 2013.

“The last two years have not been easy for Musclefood,” he added. “Competition has increased from other retailers; trading conditions have been tough, and a couple of key appointments made by the business didn’t work out. When Mark and I stepped into the role in September it was clear we were faced with a team lacking motivation, direction and focus.

“After several years of phenomenal growth, for the first time in our history we found ourselves looking at a decline in sales. A direct result of bad decision-making and a drastic move away from business as usual.”

Musclefood plunged into the red in the year ended 31 March 2019, falling from a pre-tax profit of almost £2m to a loss of £900,000 as turnover declined 17% to £36.7m, according to the last set of accounts filed at Companies House.

Preston said progress of the turnaround since taking the reins had been rapid.

“Within the first month we’d headlined the business vision plan for the next three years, stopped the spend culture and laid solid foundations needed to move the business forward at pace.”

Wasley added growth at the business had been “massive” during this first four years, with a “transitional period” in the past two years.

“We’re now at the start of the journey of Musclefood’s continued growth,” he said. “We’re investing heavily in the website, improving its usability for customers and are creating a separate tech team based in Manchester. We’re already 24-strong in that office after just 12 months and have plans to increase the technology, e-commerce and digital marketing capability.”

Musclefood is also investing in its West Bromwich facility to increase capacity and the volume of deliveries.

Sales at the business, which is owned by meat wholesaler DB Foods, were up 130% before lockdown and have continued to rise during the crisis.