Pete Sharman, This, on dentists, coffee and Leonardo DiCaprio 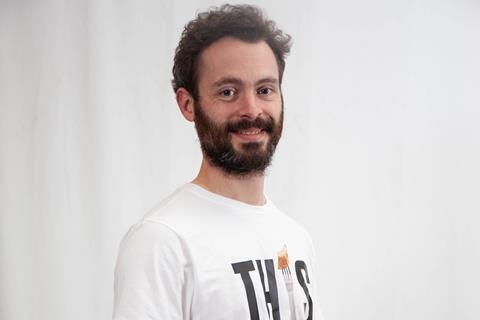 What was your first job? I was a bike mechanic at Halfords. I’m currently fixing a colleague’s bike in the office so I’m still putting those skills to good use.

What’s been your worst job interview? It was an interview for a large accountancy firm carried out over a dinner with an open bar. I don’t remember the end, but they wouldn’t even let me into the club next door when I left the interview. Suffice to say, I didn’t get the gig.

What was the first music single you bought? It was Michael Jackson’s Bad. On a cassette from a car boot sale.

How do you describe your job to your mates? I make meat out of plants.

What is the most rewarding part of your job? Launching a new product – turning something from an idea into a real tangible thing you see on a shelf.

What is the least rewarding part? I don’t think there are many non-rewarding parts. Probably it’s filing invoices…

What is your motto in life? There’s a solution to every problem.

If you were allowed one dream perk, what would it be? The ability to pause time would be nice. It would be great to get more hours squeezed into the day.

Do you have any phobias? I hate dentists and wasps.

If you could change one thing in grocery, what would it be? I’d make data more readily available – there’s so much good you can do with it and it’s often prohibitively expensive.

What luxury would you have on a desert island? A coffee machine – I currently have about five cups a day (I’ve cut down). And probably my wife.

What animal reflects your personality? I have no idea… I love dogs though, so maybe a dog?

What’s your favourite film and why? The Great Gatsby – I like the book and have a huge man crush on Leonardo DiCaprio.

What has been the most embarrassing moment in your life? Choking on a Big Mac at the beginning of our TedX talk, which has now been watched by more than 100,000 people…

Which celebrity would you most like to work with and why? Leonardo DiCaprio. See above.

What would your death row meal be? Obviously This.