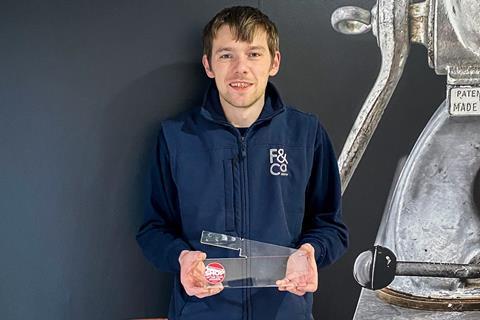 Why did you decide to go for a career in food? Shortly after the first national lockdown was announced in March 2020, I saw that local online butchers Farmison & Co were hiring, as they required staff for immediate start to help with the skyrocketing demand as a result of the pandemic.

Although the role was temporary, I was excited about a career change and to be there doing my bit to help feed the nation during such an unprecedented time, as well as the opportunity to work at an award-winning company that I had heard so much about.

During my first few days, I quickly grew a fascination with watching the Master Butchers go about their work and the knowledge and experience they were passing on to me. I felt lucky to be working at such an innovative national butcher, with a state-of-the-art ERP system coming into its own alongside the growth of online demand. Although I had a good preconception of what it might be like to work at Farmison & Co, I hadn’t anticipated the true scale of the operation and how efficiently we were able to meet demand.

I had always been passionate about food, and this was only fed by seeing the number of cuts and products Farmison & Co sell – the largest range in the UK. Through the range, coupled with the experience of the team, this once new and unfamiliar environment quickly became an even more exciting place to learn and grow. Looking back, I cannot think of a better scenario in my early days of butchery to pick up the skills and valuable experience I now have.

After a busy three months, I was thrilled to be offered an apprenticeship to further develop my skills and learn the true art of butchery.

“The biggest misconception I’ve faced is that butchery is simply ‘cutting up meat’. There’s so much more to it ”

Explain your job to us in a sentence (or two): Whilst I am still working as an apprentice, my job consists of learning the full process of butchery and the large Farmison & Co range, including the vast number of heritage breed species, as well as the manufacturing of meat products.

What does a typical day look like for you? A typical day starts at 5am for me and I usually work until 2pm – every day, however, is different. Some days I will cut and break down heritage breed lamb and pork, a process which I find most interesting as I get the chance to learn about the differences in the breeds.  More recently I have been learning to cut, string and roll the more choice cuts Farmison & Co sell, as I progress with my apprenticeship.

Tell us about how you went about applying for your job. The interview process was short, but thorough due to how quickly Farmison & Co required staff to assist in the butchery as demand grew unprecedently overnight.

After three months, I was then given the opportunity to interview for the chance to become an apprentice butcher. Toughest question? Would you mind working the occasional 10pm – 6am night shift at Christmas! Turns out, they’re not so bad after all, and it felt great being a part of Farmison & Co’s busiest Christmas on record.

What’s the best part about working for a food company? Farmison & Co offer the widest range of heritage breeds in the UK, and that means learning the intricacies of each breed in and out to yield the most from each animal. I also love the detail of the manufacturing process – the recipes, ingredients and the end product for the consumer are extremely thorough. It’s this level of attention to detail that I enjoy the most, and it feels like I’m part of a much bigger movement in the UK of encouraging the nation to eat better meat.

What advice would you give to other young people looking to get into the food & drink industry? You might look at an online food company, or the shelves of your local supermarket, and not wonder too much about what goes into producing that product. For me, I’ve always been fascinated by how food is produced and where it comes from. Working in the industry, and for a company like Farmison & Co, you learn the provenance, focus, and attention to detail that goes into every product of the range, and it certainly makes me appreciate food as a whole much more.

My advice would be to embrace this and make it your passion, pushing for quality over quantity, whilst always looking at things with a sustainable lens!

What’s your ultimate career dream? Having worked at Farmison & Co for almost a year, I’m now committed to becoming a fully qualified butcher and, one day, a Master Butcher driving product innovation. As a next-generation butcher, I feel it is my responsibility to not only to pass on my learnings, but to promote a positive image of butchery in the UK – this is an artisan craft, and not just ‘cutting up meat’!