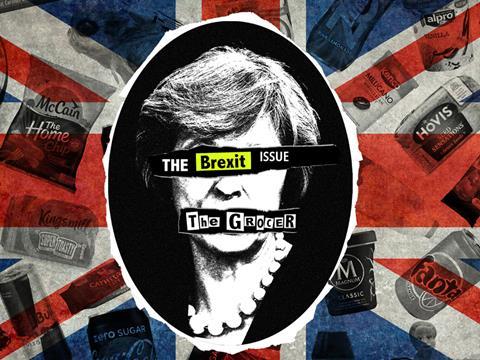 At a time when established power structures the world over are being blown apart, Britain’s biggest brands are facing their own struggle with change.

Each of the top six brands has seen value and volume sales slide, with an eyewatering £154.3m wiped off their combined value. Warburtons and Birds Eye, in particular, suffered a torrid 2016 with sales down 9.3% and 5.3% respectively, while Coca-Cola shed a further £37.2m following 2015’s £30.1m reversal.

Attention since June has understandably been focused on the impact of Brexit on grocery sales and prices, but what is noticeable is how little movement in price there has actually been to date as the competitive forces that drove deflation these past three years remain very much in play.

In fact, more than half of the top 100’s average selling price has either fallen or stayed the same in the past year. While suppliers are near unanimous in reporting pressure on input costs since the vote to leave the EU, the majority say that, for the moment at least, they are carrying these costs within their own businesses.

For leading brands, Brexit-related pressures are almost the least of their problems. Some are battling against countervailing consumer trends. In Coke’s case, the backlash against sugar that has negatively impacted the carbonates sector. “Consumers are more health-conscious and there’s more scrutiny on sugar, and we understand that,” says Leendert Den Hollander, VP and general manager for GB at Coca-Cola European Partners (CCEP). “If you look at our portfolio you will see that the zero-sugar variants are growing ahead of the regular variants across all our brands.”

This may be so, but Coke’s performance seems less defensible when you consider that its main rival, Pepsi, delivered impressive growth in both volume and value sales. Indeed, while the zero-sugar variants of both brands – Coca-Cola Zero Sugar and Pepsi Max – achieved strong uplifts (albeit Pepsi Max from a much higher base), it was Pepsi’s ability to grow sales of its regular variant too that allowed it to eat into Coke’s market share.

Bakery is another category facing systemic challenges, not least the consumer shift away from wrapped bread. Warburton’s sales plummeted by £64.2m, while Kingsmill and Hovis suffered smaller declines. Zoe Taphouse, category director at Kingsmill owner Allied Bakeries, warns that the bakery category must evolve if it’s to deliver growth. “As a category we need to become more relevant for today’s consumer demands, meeting ever-changing population and household needs,” she says.

Lower down the list there were equally brutal results. Thorntons’ sales lost a quarter of their value while Princes endured a precipitous drop of £46.9m. Household and laundry brands also suffered at the hands of promiscuous consumers with Velvet, Surf and Persil recording substantial falls in sales.

But 2016 was not all doom and gloom. Kinder sales soared 23.3% boosted by strong NPD, and Alpro continued to benefit from growing demand for plant-based options, adding a further £26.7m in sales.

In dairy, Arla’s masterbrand strategy is paying dividends. Sub-brands such as Cravendale and Lactofree and newcomers including Protein cheese and Best of Both milk helped add £37.7m in sales, more than any other brand. Arla is also one of the few brands to openly declare it hasn’t faced inflationary pressures since Brexit, a statement given credence by its average selling price falling by 2.7%.

Dairy brands, in general, have so far not needed to increase prices, with Clover, Müller Corner, Müller Light, Anchor and Lurpak all seeing their average price fall. This is likely to reflect the falling milk price in the first half of 2016 rather than the sector’s resilience in the face of Brexit, and analysts believe that for the majority of food & drink products price increases are inevitable as we move further into 2017.

“Prior to Christmas, retailers were doing their absolute upmost to hold back price increases simply because they didn’t want anything to put at risk their all-important final quarter,” says Retail Remedy managing partner Phil Dorrell. “The problem now is it’s not just one or two small suppliers that are saying they’ve got issues regarding prices, it is everybody. Our expectation is prices will increase across the board.”

For some brands, cost pressures have already resulted in price rises. The largest leap was recorded by Twinings, whose average selling price increased by 9.8%. Tea is traded in dollars and so the devaluation of sterling has added significantly to the cost of production.

Cocoa is another commodity for which cost pressures, already evident prior to last June, have been exacerbated by Brexit. “The price of cocoa, which we import into the UK, is up by over 50% since 2013,” says Francesco Vitrano, marketing director at Mondelez. Vitrano says Mondelez continues to carry these increased costs within its business as much as possible “because our priority is to keep our brands as affordable as we can”. And while the price of Cadbury Dairy Milk has indeed fallen marginally, other confectionery brands such as Galaxy, Lindt Lindor, Kinder and Kit Kat are all selling at a premium compared with 2015.

Yet the picture is more complex than products made with imported ingredients being forced to raise prices. A 3.6% increase in the average selling price of Hovis is eyecatching given the brand is considered to be well placed to ride out cost inflation due to its UK sourcing commitment. Conversely, Warburtons and Kingsmill, which both source predominantly from overseas, have seen their average selling prices decrease, due in part to high global stocks keeping world wheat prices low.

Far from putting up prices, a number of brands have seen them tumble, driven in part by fears of delisting amid competition from private label as well as a shift in promotional mechanics towards one-off price savings. Napolina is a prime example. Its average selling price is down 12.7% resulting in £18.4m in lost sales, despite volumes remaining largely unchanged.

One way in which brands are likely to mitigate future cost pressures is by reengineering their pack sizes, although such tactics are fraught with risk. The likes of Terry’s Chocolate Orange and Toblerone, for instance, have already found themselves the focus of tabloid outrage for reducing pack sizes to maintain price points.

Although certain brands, including Warburtons and Arla, are adamant they have no current plans to reengineer pack sizes, Dorrell believes it is a tactic that both retailers and suppliers will pursue more readily in order to avoid price hikes. “Previously it was about making more margin, now it’s a case of it’s an absolute necessity and suppliers are doing it off their own bat. I think we’ll see this accelerate quite a lot.”

Another potential Brexit-mitigation tactic is for retailers to source more products from the UK. In February, Morrisons announced plans to recruit more than 200 new suppliers from across England, Scotland and Wales, a move it claimed was driven by demand for more local food but has the added bonus of potentially negating currency price volatility. Other supermarkets may follow suit, although Dorrell says getting UK-supplied products across a broad range of categories is difficult in a short space of time.

Publicly, at least, the supermarkets are refusing to entertain the prospect of food price inflation. Asda is speaking of sharpening its prices as it seeks to reverse faltering sales. Dave Lewis has previously said Tesco is assuming deflation on a relative price position until 2020. Mike Couple, meanwhile, admits the impact of the devaluation of sterling remains uncertain, but notes that Sainsbury’s customers paid 14% less for a typical Christmas basket in 2016 than they did two years ago.

Unilever has already felt the sharp end of retailers’ unwillingness to move on price following its Marmitegate spat with Tesco last year, and unsurprisingly brands themselves are wary of positing that price rises are inevitable.

Den Hollander, for one, says Coca-Cola must manage inflation. “Our focus is on two areas: cost, and really looking at cost within the supply chain to see if we can do things better or more efficiently; and around innovation, because it’s important we continue to bring brands and products [to market] that consumers find worth paying for.”

For Britain’s biggest brand, Brexit adds another layer of complexity to what is already a challenging retail environment. Yet for all the headwinds in the market, there’s no shortage of brands in our ranking proving that products and messages that chime with the times can further their ascent to power.

Brand values in this report are the sum of value sales of all products across multiple categories trading under a primary trademark. For example, Coca-Cola is the sum of Classic Coke, Diet Coke, Coke Zero Sugar, Coke Life and all other flavour variants. In instances where a product features two brand names, a judgement has been made over which is the primary brand. For example, Dairy Milk Marvellous Creations and with Daim and Oreo products have been included under the Cadbury Dairy Milk parent brand, because this is the most prominent brand name and colours on the package.

Euroshopper: for the purposes of this report, Booker’s Euroshopper range has not been defined as a brand, so does not appear.

Nielsen’s retail measurement service provides comprehensive information on actual purchases, market shares, distribution, pricing and promotional activities, and is the fastest and most accurate measure of consumer sales. Nielsen’s services are always dynamic and are constantly being improved to reflect the grocery marketplace.

Nielsen’s retail measurement services provide the fmcg industry with expert information and analysis of consumers, categories and the retail marketplace. For the purposes of this report, a brand is defined as all products within categories that are sold and marketed under a given brand name. The report includes grocery and household categories and does not include tobacco, alcohol, personal care or OTC.

Britain’s Biggest Brands report was compiled by The Nielsen Company exclusively for The Grocer magazine/William Reed Business Media. No reproduction of this list or data within, full or in part, for commercial use is permitted without prior consent of The Nielsen Company.