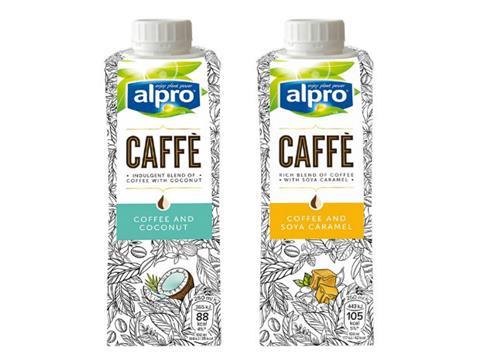 Alpro is set to expand its RTD Caffè line-up with the launch of single-serve variants and a new flavour.

The RTDs will initially go on sale in Tesco’s dairy fixture (rsp: £1.70/250ml) from 14 May. Existing Coffee & Soya Caramel flavour moves into the on-the-go format and is joined by a new Coffee & Coconut combination.

The move comes amid a host of NPD for the dairy alternative giant in what it has dubbed the ‘Year of Plant Power’. The brandfirst moved into the food-to-go chillers in Sainsbury’s with its cranberry and raspberry soya yoghurt alternatives.

Caffè’s was initially launched in one-litre cartons came during this year’s Veganuary, which saw more than 78,000 Brits ditch animal proteins for the first 31 days of the year. It also expanded its partnership with Whitbread-owned Costa to supply the chain with Alpro Coconut For Professionals as the chain introduced a dairy-free range of coconut-flavoured drinks.

“Early results show Caffè one-litre is capturing the interest of people looking for plant-based inspiration throughout the store and bringing new shoppers into the category,” said head of marketing at Alpro UK & Ireland Vicky Upton.

“This mirrors the trend we’re seeing for plant-based in the out-of-home sector, too, where soya, coconut and almond coffees are fast-becoming a go-to. We’re observing more and more that people are using foodservice outlets as a test-bed for products that they will go on to seek out in-store.”

Like multi-serve Caffè SKUs the new drinks are made with Rainforest Alliance-accredited coffee beans, the brand confirmed, and contain about 30% less sugar than the RTD caffé latte market average.

“We’re confident that this new on-the-go proposition will resonate just as strongly with shoppers - providing them with the new opportunity to enjoy chilled plant-based coffee for the ultimate ‘me-time’ moment on-the-go,” added Upton.