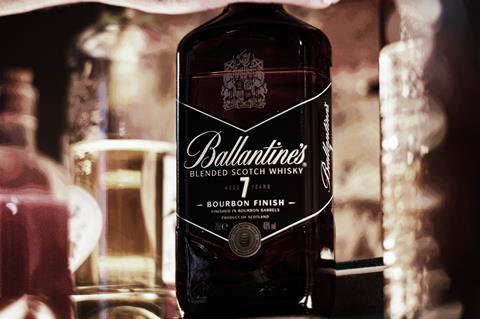 Ballantine’s is hoping to tap the vogue for imported whiskey with Ballentine’s 7, a new seven-year-old scotch finished in American bourbon barrels.

The dram is billed as having “the depth” of scotch whisky “paired with the caramel sweetness” of its transatlantic cousin (rsp: £28/70cl).

The seven-year aging process along with its bourbon barrel finishing process “brings extra layers of richness, creaminess and caramel sweetness to the blend, making it ideal for scotch lovers wanting to dabble in bourbon, and for bourbon fans wanting to break into scotch”, he added.

The bottles feature a black label with “subtle” gold detailing for “a premium feel” while “retaining the distinct bottle shape and chevron label for which Ballantine’s is globally recognised”, according to the brand.

It has rolled into Drink Supermarket in the UK.