Belvoir Fruit Farms to debut in posh squash for children 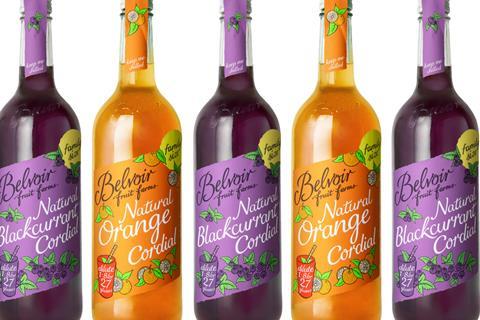 Both variants made with more than 50% real fruit juice

Posh soft drink brand Belvoir Fruit Farms is to make its debut in child-friendly squash with a two-strong range.

Natural Orange and Natural Blackcurrant would roll out in mid-May as “a premium family product to bridge the quality gap between mainstream dilutes and super-premium cordials” Belvoir said.

The new duo’s “traditional, simpler flavours” accounted for more than half of all squash sales, the Leicestershire brand added. However, variants in the premium segment of the cordials category were “very adult-focused”, rather than being designed for everyday family consumption.

Both made with more than 50% real fruit juice, Belvoir’s latest drinks were twice as strong as typical mainstream fruit cordials, according to the brand’s MD, Pev Manners. Each 750ml bottle (rsp: £3.89) makes 27 250ml glasses of squash. Sugar content is 4.9g per 100ml.

They were created to make Belvoir’s portfolio “more widely available to other audiences and occasions” Manners said.

With no artificial flavours, sweeteners or preservatives, the new cordials can be ranged as ambient products but must be kept chilled once opened.

They will be available shortly before Belvoir launches its biggest-ever campaign, the £2.5m ‘Sip & Dip’. Kicking off in late May, it will feature an on-pack promotion across all grocery SKUs, offering £500k worth of prizes, including portable hot tubs.

The push will be supported by a range of activity, the most prominent of which will be takeovers of two London lidos: Park Road Pool in Crouch End and Brockwell Lido in Herne Hill. On 6 and 13 July, Belvoir will hold family activity days followed in the evenings by ticket-based parties featuring celebrity DJs including Lauren Laverne and Alice Levine.